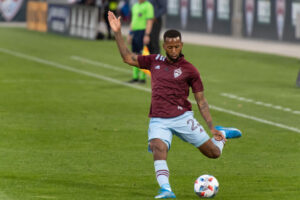 COMMERCE CITY, Colo. – Colorado Rapids hosted Seattle Sounders FC on Sunday night in their traditional 4th of July home game. It was a cathartic night for Colorado’s soccer community with the first Rapids home game operating at full capacity at Dick’s Sporting Goods Park since the pandemic started. The club also retired former captain Pablo Mastroeni’s #25 after the match. In the end, it was a Rapids Sounders draw.

The Rapids were the better side in the first half, but got little show for it. They pressed Seattle high and in the middle of the pitch, winning the ball and then going forward to find wide attackers in space. Michael Barrios and Jonathan Lewis were very active.

Colorado’s best chance came in the 18th minute. Cole Bassett had a half volley chance on a cross by Michael Barrios, but it was deflected out for a corner.

Seattle had just one decent chance, a Raul Ruidiaz header six minutes in, before the opening goal. Alex Roldan won the ball back from Sam Vines when he passed to Andre Shinyashiki. The wingback blasted the ball through goalkeeper William Yarbrough, who got a piece but couldn’t keep it out of the back of the net. The half ended 1-0.

The Rapids picked up where they left off in the second half. The final found their shooting boots on 58 minutes. Sam Vines sent a hopeful ball in the box that went by players from both teams, falling to Barrios on the edge of the box. He cut inside a threaded the shot through Abdoulaye Cissoko’s legs and inside the far post.

The game opened up after that with Colorado again getting the chances in volume. They could not finish and the match ended in a draw.

Everything but the finish: Despite not having Jack Price, the Rapids put a shift in, to a man.

Still undefeated: Seattle did not look great at times but did enough defensively, especially after the second goal to earn a draw. They remain the only undefeated team in MLS.

Soccer comes home: 17,104 tickets were distributed for this match, the most since March of 2018 for the Rapids. It was a great atmosphere for the game, fireworks, and Mastroeni’s number retirement.