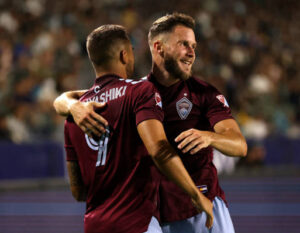 CARSON, Calif. – It was a battle of third versus fourth in the MLS Western Conference. LA Galaxy hosted Colorado Rapids on Taco Tuesday night, with both teams playing the previous Saturday. It was a wild match. Never thought I’d write this sentence, but Loki’s Toboggan would decide the game.

The Rapids were clearly the better team in the opening minutes. They were dynamic in transition with Cole Bassett and Jonathan Lewis linking up to create open looks.

Rayan Raveloson kicked Lewis from behind in the 10th minute without getting the ball. Silviu Petrescu initially ruled the play a corner before going to the monitor and calling a penalty. Lewis hit the top corner on the spot kick to make it 1-1.

Lewis went down twice more in the box in the first half. Neither were called a penalty and VAR did not get involved the rest of the half. The most controversial of the two was in the 17th minute when Sega Coulibaly pushed him from behind with an arm to the upper body.

The Galaxy settled down 20 minutes in, tying the game in the 34th minute. Off a recycled set piece, Raveloson uncorked a shot from the top of the box to the bottom right corner.

The hosts had a scary moment toward the end of the half. Coulibaly had to be subbed out due to concussion protocol for Nicholas DePuy. LA kept the one-way traffic going into the second half. William Yarbrough was forced into a spectacular save five minutes in. Derrick Williams was wide open for a header inside the six, but Yarbrough parried the ball out.

Both teams hit the post in the second half. Collen Warner found Bassett, who shot first time and hit the crossbar. Minutes later, Samuel Grandsir cut inside and tried to pick out the far corner, but was inches away from taking the lead.

With the game opened up, both teams went for it. The Rapids scored in the 73rd minute. Setting up in the Loki’s Toboggan formation, Bassett flicked the ball from the near post to the far post. Substitute Andre Shinyashiki was there to head it in, off Williams and into the top of the net.

Colorado saw out the game to win 2-1.

VAR: The officials got the call right on the initial PK shout for Lewis. I felt the second play was worthy of a VAR review. Colorado would feel hard done by the officiating in the first half.

Raveloson regression and redemption: The No. 6 continues to carry the Galaxy with Chincharito Hernandez still out. He put his team behind, conceding the penalty early but redeemed himself with the goal.

Game of inches and weaknesses: This game was a microcosm of the season for both these sides. A close match, neither team plays up to their potential, and it came down to one team finding a way to win. The Loki’s Toboggan set piece by Colorado was brilliantly executed. Ted Lasso would have been proud.