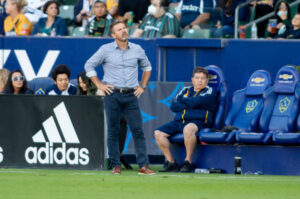 CARSON, Calif. – LA Galaxy hosted Vancouver Whitecaps FC on Sunday evening at Dignity Health Sports Park. The Gs were coming off back-to-back wins at home with Chicharito Hernandez still out. Vancouver had a busy secondary transfer window, as Ranko Veselinovic were looking to fight their way back into playoff contention.

Greg Vanney deployed the 4-3-3 setup with Chicharito still out, focusing on team play and building out of the back. Samuel Grandsir and Kevin Cabral combined up top to create chances. Vancouver had a number of players unavailable, so Marc Dos Santos trusted some younger players including Patrick Metcalfe in midfield to play in transition.

The first two good chances for each team fell to Veselinovic and then Grandsir, but they could not finish.

With the game relatively open, Cabral got the home side on the board first just after the half hour mark. The center forward got the ball in a pocket of space in the middle of the box. He took a touch to control, then passed it into the back of the net with composure.

Things would get worse for the Caps right before halftime. Lucas Cavallini went down with a noncontact injury to his left knee. He was subbed off to start the second half.

Vancouver would respond regardless five minutes into the half. Off winning a corner, Ranko Veselinovic won the header in the air, being marked by Sega Coulibaly, to score. Déiber Caicedo provided the service.

The visitors grew into the match after that, frustrating the Galaxy as they went forward. While they allowed a number of chances, they poor in quality. Brian White had the best look late in the match with both teams laboring, but his right footed shot was wide.

The match ended 1-1 in controversy as Cabral went down in the box with Maxime Crépeau going for a 50/50 ball. Replay clearly showed no contact between the players.

Cabral back on the score sheet: The French striker, maligned for his lack of finishing, scored his second goal of the season. The Galaxy have been inconsistent offensively without Chicha. He’s needed back fit, but other players still have to work on their consistency, Cabral included.

Whitecaps building up: Vancouver’s been improving the last few months. They’re now unbeaten in five (albeit with four straight draws). But the kids are growing and they just had a busy transfer window, highlighted by Pedro Vite. They’ve got some depth now and more attacking pieces. They could be competitive in the back half of the season, provided Cavallini is ok.

Work to be done: This game was a classic tale of two halves. The Galaxy owned the first half. Vancouver were the better side in the second 45. Consistency is needed for both sides to succeed.