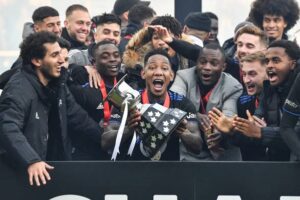 Off the opening kickoff Montreal came out firing and Romell Quioto got the first scoring chance of the game 12 seconds into the game but Quentin Westberg was able to make the save. Montreal seemed hungry looking for that first early goal to give their home fans something to cheer about.

Montreal didn’t get another shot on goal until the 27th minute when Victor Wanyama was able to get a shot off but lacked strength and was easily handled by Westberg. The first half was becoming a tightly contested battle between two teams who don’t like each other and it showed.

Djordje Milhailovic had Montreal’s third shot on target in the 38th minute but Westberg was able to make the save and keep the game scoreless. Minutes later Quioto was at it again with a great run and great shot but again was denied by the foot of Westberg.

Quioto had another chance in the 45th minute but Westberg seemed like a wall in the Toronto net. Two minutes of extra time was added and the first half finished 0-0.

Once again Montreal started the second half with a bang continuing to dominate the game leading with 70-30% in terms of possession and outshooting them and had two early chances in the first couple minutes but again failed to find the back of the net.

Montreal got a great chance in the 53rd minute when Mihailovic was able to get a great shot off but Westberg made another hand save. In the 56th minute, things got heated and a big scrum ensued next to the Montreal net but cooler heads prevailed and the game continued.

Two minutes later Zachary Brault Guillard went down to injury and was stretchered off and Wilfred Nancy replaced him with Zorhan Bassong. Victor Wanyama had a great chance to open the scoring but his shot went off the crossbar and out.

In the 66th minute, Milhailovic managed to get another shot on goal but Westberg came up with another big save. Montreal finally opened the scoring in the 72nd minute when Quioto was able to get a lob shot over Westberg and into the back of the net for the 1-0 lead.

Five minutes of extra time was added to the 90 and Toronto came very close to tying the game at one but with a gaping open net, the shot went off the post and was cleared out of danger. Again the visitors pressed in the dying minutes but were denied by Sebastien Breza who got the start in goal this afternoon.

The ref blew the whistle five minutes later and Montreal had won yet another Canadian Championship and a spot in the 2022 Concacaf Champions League.

We have the lead in the final

” This win is for them and not for me and I am very happy for them, we played the way we started the season playing aggressively offensively and defensively, this win means a lot for our team, our city, our fans, and of course our players”.

As mentioned Montreal has now qualified for the 2022 Concacaf Champions League and the tournament will begin in the third week of February 2022 and will cumulate with the final in the first week of May.