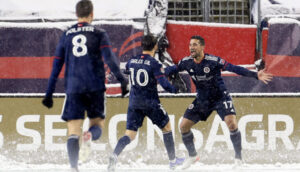 Foxborough, Mass. — With the consistent falling of snow proving to be a pertinent hurdle, the New England Revolution dominated proceedings against Pumas at Gillette Stadium. Besides one save from Earl Edwards Jr., the Revolution were fairly untroubled at the back in comparison to their Mexican counterparts. New England were a force to be reckoned with and they take a healthy advantage into the second leg on Pumas soil.

How did the game transpire?

Snow was on the agenda in the days building up to the game and this was an advantage that the Revolution would need to cash in on. The Pumas players were said to be in awe of the conditions they went to battle in and perhaps it showed out on field. From the very first minute, it was the MLS team who were on top. Now, they will go down to Mexico with the goals to show for it.

Of course the Revolution saw their clash with Haitian side Cavalry postponed, meanwhile, Pumas saw off Saprissa of Costa Rica in the last leg by an aggregate score line of six goals to three. Following on from the emphatic victories of both NYCFC and Seattle last night, the mantle was passed on to New England to continue this trend.

Here’s how we line up tonight vs. @PumasMX #NERevs | #SCCL22

Henry Kessler went off injured in the last outing against FC Dallas and so his replacement in that one, Omar Gonzalez, was in from the start here. The only other change to the XI that edged out the Texans saw Arnor Traustason come into the midfield with the experienced Tommy McNamara dropping to the bench. The aforementioned Edwards Junior continues in goal due to Matt Turner’s injury.

Bruce Arena’s men began the game in a very lively fashion indeed. The likes of DeJuan Jones and Adam Buksa got early look-ins, the former playing a huge roll in the opener. Jones played it across to MVP Carles Gil and he unselfishly laid it off to Sebastian Lletget. The USMNT midfielder fired home the first goal of the game and what is his second for the Revolution after netting in the season opener against Portland. Gil and Lletget have built a harmonious relationship already, the diminutive Spaniard saying after the game that Lletget is “a top player, he can score goals, assists, many things, defense too.”

The teams went into the break with the score line at 1-0 and Pumas were yet to threaten at all going forward. That being said, it was the home side who took it up a notch in the second 45, forward Adam Buksa being at the fore of this. His strike partner Gustavo Bou rattled the woodwork with the snow falling down from the crossbar in comedic fashion. Shortly after, the Argentine made it 2-0 as he was on the receiving end of a Lletget chipped-ball only for an offside flag to cut the celebrations short.

Going back to Buksa and despite squandering a number of chances, he walked away from this one with a brace. The previously mentioned fantastic save from Edwards was closely followed by the second goal of the game, Buksa converting at the second time of asking to open his account for 2022 after Pumas goalkeeper Talavera denied him in the first instance. Right at the death, with the clock in the red, Gil took up his usual role as the chief creator and he set up the Pole, Buksa making it 3-0 and putting the cherry on top.

Coach Arena was full of praise for Buksa in the post-match press conference, saying that, “he had a tough time for large segments of the game, he kept working hard and pushing and hanging in there and he got two huge goals. So that’s the signs of a good striker, strikers don’t have great moments throughout a match.”

Arena went on to also shoutout Bou who may not have scored but he played an equally important role when it came to the attacking prowess of the Revolution.

Is it still all to play for?

It would be easy enough to be dismissive and say that the tie is dead and buried. Three goals-to nil may well be an insurmountable task in some cases but that will not translate here. Pumas are a very competent side even if they failed to impress in Boston. On top of that, MLS teams have a turgid record in CCL and a trip south of the border is never a foregone conclusion no matter what advantage you take with you.

These sentiments were reinforced by both Gil and Arena after the final whistle. The latter made sure to point out the following, “not that they’re not going to be ready to make up this goal difference,” when talking on the importance of getting more than just the one goal. Gil on the other hand commented, “We had many, many chances to score goals so yes, [we need to] try to continue like this.”

“If we’re guilty of anything it’s not getting more goals,” was a punchy quote from Arena, there were numerous chances squandered and that can easily come back to bite you against such fierce competition. A lack of Pumas danger in the US does not directly correlate to what will come when they are on home soil.

It was a great evening in testing conditions for the Revolution players. There is still a tough trip to Mexico on the horizon with Pumas being a good team, but before that, an MLS clash with Real Salt Lake who beat the Sounders last time out!

The post Pumas are dominated by the Revolution at a snowy Gillette Stadium appeared first on Last Word On Soccer.