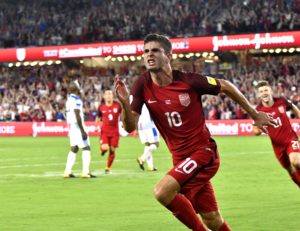 August 26 2021– Christian Pulisic, Weston McKennie, and Tyler Adams headline the 26-player for the USMNT ahead of September’s start of World Cup Qualifying.

Gregg Berhalter named his roster for the trio of matches, which will see many of the expected first-team group chosen. In addition to Pulisic, McKennie, and Adams, John Brooks, Gio Reyna, and Sergiño Dest were also included.

Several of the inclusions featured at the recent Concacaf Gold Cup including Kellyn Acosta, James Sands, Miles Robinson, and George Bello. Matthew Hoppe, Julian Green, Chris Richards and Yunus Musah were among the players left off the roster for respective reasons.

“We have spent the last two years building the foundation and culture of the team for this moment,” Berhalter said in a statement. “World Cup Qualifying is a grueling challenge that demands a complete group effort in order to be successful. We are confident in our ability to respond to the challenges that are presented along the way.”

Berhalter can only name up to 23 players for match days, which will include two road matches in the first set of qualifiers. Six players on the 28-man roster have previous WCQ experience, led by Pulisic (13 caps), DeAndre Yedlin (10 caps), and Acosta (six caps).

The USMNT opens the octagonal round at El Salvador on September 2 before returning to Nashville for a showdown with Canada at Nissan Stadium on September 5. Berhalter’s squad concludes its opening trio of matches on September 8 at Honduras.

Here’s a closer look at the 26-player roster (caps/goals):