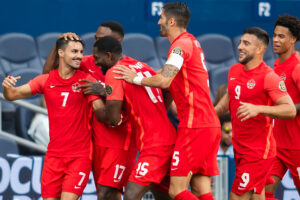 Promising Canada Soccer looks to continue their excellent form as they take on the U.S. in the Gold Cup Group B decider on Sunday.

PREVIEW – No, it won’t be the blockbuster clash of Alphonso Davies vs Christian Pulisic, or even Jonathan David vs Giovanni Reyna. However, Canada vs the U.S. on Sunday is still a mouthwatering fixture that holds plenty at stake. Both nations managed to beat Haiti and Martinique in their opening two matches of the Concacaf Gold Cup, and both will have their sights set on topping the group to potentially avoid clashing with regional powerhouses Mexico in the first two rounds of the knockout stage.

Canada Soccer announces Alphonso Davies is out of the Gold Cup with an ankle injury sustained in training. He’s on his way back to Bayern to begin recovery. A big hit to Canada’s chances. #CanMNT

As mentioned, both Canada and the USA are missing star players, but there is more than enough quality in the match to make it a must-watch. This is especially true when high-quality competitive clashes have been tough to come by in Concacaf over the past couple of years. For the first time in a long time, you could make a strong case that Canada soccer has a stronger squad than the U.S. for this tournament.

Both squads are made up mostly of Major League Soccer players, but Canada has a slight edge with a few established European players in their squad –  Junior Hoilett, Cyle Larin, Stephen Eustáquio, and Steven Vitoria. It’s worth noting that while the U.S. has taken a squad made up entirely of B-choice players, Canada has had the privilege of taking a good chunk of their A-team, apart from Davies, David, Wotherspoon, Borjan, Adekugbe, Hutchinson, and a couple of others.

The Current Situation for Both Teams

At the moment, both sides are sitting on six points after two matches played, with their spots in the knockout round already confirmed. Both teams have the same goal differential. However, Canada has the edge on goals scored as it stands, which means a draw for them on Sunday would secure a first-place finish in the group – something they have not done in the Gold Cup since 2009 when they did well to top a strong group containing Costa Rica, Jamaica, and El Salvador.

This Canadian team is not the old Canada though. Finishing first in the group at a tournament like this will from now on be considered an expectation and always a serious possibility, rather than the pleasant surprise it might have been in the past. Of course, the USA, a team that has topped their group in 4 consecutive Gold Cups, stands menacingly in their way.

It’s fascinating to see this rivalry grow, and many chapters will be written in the coming years, especially with World Cup qualifying on the horizon. As recently as two years ago, it would have been difficult to consider Canada a true rival of the USA in men’s soccer.

The History between the CanMNT and the USMNT

Canada has largely been no match for the Yanks historically, and the USA have always been more focused on their noisy neighbours to the south. However, Canada’s reputation in Concacaf grows by the minute, as it’s very arguable that two of the top five players on the continent are on Canada’s books – Jonathan David and Alphonso Davies. Neither will be on the pitch in this tournament, but the match on Sunday is an excellent opportunity for Canada to show their neighbours that they mean business, and not just in that famous one-off match in October 2019. Canada is here to stay.

The @USMNT has clinched their spot in the @GoldCup quarterfinals!

The U.S. will have other ideas though, and on the back of their 6-1 win over Martinique, they will certainly have some confidence. Gregg Berhalter’s team came out as 1-0 winners in their opening match of the group against Haiti, which was a rather ugly win that had fans worried. But the introduction of the mesmerizing Daryl Dike against Martinique, along with a few others, injected some much-needed life into the team.

On paper, the matchup is truly fascinating. Both sides aren’t particularly strong at the back, but also have star attackers that will surely keep fans on the edge of their seats for the full 90 minutes. There is serious attacking depth on both benches as well, with Gyesi Zardes and Junior Hoilett both scoring off the bench on Thursday for the USA and Canada respectively.

It’s almost guaranteed that Canada will stick with their 3-5-2 for Sunday’s clash, as that seems to be John Herdman’s go-to formation as he has one eye on World Cup qualifying, which begins in September. When those matches come around, that formation will allow Canada to play Davies in an exciting, attacking left wing-back role while having the option of starting two of Cavallini, David, and Larin.

Even without Davies, playing this formation in the Gold Cup allows the rest of the squad to gel together and have a stronger understanding of the system that they hope will get them to Qatar 2022. It has become clear that while Canada is in this tournament to win it, it’s also being used as an opportunity to continue developing the squad chemistry and the tactical familiarity amongst the players, which could be priceless once the bigger matches roll around in the fall.

“…I had no idea if I had scored, if I hadn’t scored…I was still hungry to get another one.”

Hear from U.S. Soccer Insider’s Man of the Match, @DarylDike, who registered t̵h̵r̵e̵e̵ two goals in the #USMNT‘s dominant 6-1 win vs. Martinique on Thursday night.

The Americans are a bit more mysterious when it comes to deciphering which system they might put to use on Sunday. In the opener against Haiti, Berhalter used a 4-3-3 which didn’t work particularly well as the team crawled to a scrappy 1-0 win. The switch to a 3-4-1-2 in their second match, albeit against a weaker Martinique side, seemed much more comfortable and got the best out of Cristian Roldan, Gianluca Busio, and Daryl Dike, who I bet have all won a place in the XI on Sunday.

It’s never a bad idea to match an opponent’s 3-5-2 variation with one of your own, and that might be exactly what we see on Sunday. It gives you the extra centre-back to help deal with the threat of a 2-striker formation and allows for a more comfortable and flexible midfield.

He’s talented, he’s young, he’s hungry, and he’s one of the only players in this USA team who would have a great chance of making their strongest 23-man squad. Daryl Dike has already proven that he can score goals in one of the toughest leagues in the world, England’s Championship, and his brace against Martinique means he heads into the match against Canada in full confidence. I’m not convinced Canada has a talented enough backline to fully deal with him.

One of the most electric players in this entire tournament is one who many people hadn’t even heard of a year ago. Tajon Buchanan had a breakout 2020 in MLS and has continued his form into this year, now playing a starring role for Canada as the rumours of a big European move intensify. His running from deep positions is near impossible to stop and he’s got the skill to match it as well. Shaq Moore might have a difficult afternoon trying to stop him.

A set-piece specialist with a great all-around game, it would be a crime if Gianluca Busio isn’t in the starting XI on Sunday. Show some Busio clips to someone who doesn’t know who he is, and they’d surely be thinking he learnt his football in Spain or Italy – not North Carolina and Kansas City. His awareness of time and space on the pitch is excellent, and he’s a very technical player as well. It seems the only player on the opposite side who might be able to match him in that regard is…

Some goals are just meant to be watched in slow-motion. Stephen Eustáquio’s @GoldCup free-kick is one of those goals. pic.twitter.com/0l16VVtnxJ

It was a toss-up between him and Cyle Larin for this final spot but Stephen Eustáquio deserves a shout based on his composed performance in the midfield for Canada against Haiti, especially when many of his teammates were playing erratic football around him. Eustáquio has been an impressive addition to the Canada Soccer program and plays at a technical level that Canada has not quite had in the past. His free-kick against Haiti was just a taste of what he is capable of producing for his country.

The post Promising Canada Soccer take on the USA in Gold Cup Group B Decider appeared first on Last Word On Soccer.