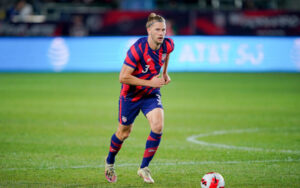 The U.S. men’s national team is looking for nine points in the upcoming World Cup Qualifying window. On the other hand, El Salvador — who is down, not out — is looking for points to make a comeback in qualifying. On Thursday, the two sides will meet in snowy Columbus, Ohio, for the first of three matches in this window.

The USMNT has called up plenty of young reinforcements. Players like Josh Sargent, John Brooks and Matt Miazga were left at home, for what Gregg Berhalter called “nothing more than form.” Meanwhile, players like red-hot Weston McKennie and reigning MLS Goalkeeper of the Year Matt Turner are in camp.

Columbus, of course, is home of the “Dos a Cero” victory the U.S. men pulled off against Mexico in 2013 — the match that put the United States to the World Cup. Right now, the U.S. sit second on the Concacaf World Cup Qualifying standings, right behind Canada. The two sides will face off on Jan. 30 in Canada. For now, the U.S. is focused on El Salvador.

El Salvador has had its reins taken by Seattle Sounders defender Alex Roldan — the younger brother of U.S. men’s international Cristian Roldan. The 25-year-old has 12 appearances and is already a captain for the team, starting in eight of his matches. Roldan could very well face off against his older brother, as Cristian is one of the older, more veteran players on the USMNT roster.

As for the United States, when selecting his roster, head coach Gregg Berhalter went youthful. He has a few veteran players, but the future of the United States is now with young players with 10 or less caps, like Mark McKenzie, Ricardo Pepi and Jesús Ferreira. The benefit to playing in Columbus is that most of these players know how to play in harsh, snow-filled conditions. As Walker Zimmerman stated: let it snow.

“You know what? I want it to be freezing, I want it to be cold, I want the snow, I want to be a part of something so iconic that I saw and I really remember growing up. And that’s exciting to me. So I think the guys are ready to embrace it, and it will be a really good environment for us fan-wise as well,” Zimmerman said.

Three things to look for in USMNT vs. El Salvador

How to watch USMNT vs. La Selecta