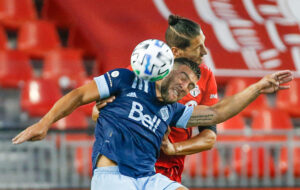 PREVIEW – Exploria Stadium in Orlando, Florida is the site for the Toronto FC v Vancouver Whitecaps FC matchup. Toronto is coming off a 2-4 defeat to BMO Derby rivals Montreal while Vancouver won their first season game against their Cascadia rivals, the Portland Timbers 1-0. The game will count as a TFC home game.

How did Toronto do in their last game?

TFC was the only Canadian MLS team to not win their opening MLS game last week. A key part of their loss was giving up the first two goals in the first and second half. They will need to start the game better when they face Vancouver on Saturday. This is what current Toronto captain Michael Bradley said about the game:

“We never really gave ourselves a chance with the way we started the game. You find yourselves behind 100 seconds into the game and from there you’re chasing. It’s a frustrating day.”

It looked like Toronto was back in the game when Auro Jr. was taken down in the penalty box and Marky Delgado scored late in the first half. However, the next TFC goal came when Toronto was already trailing 4-1.

A proud day for the @tfcacademy

If there is a bright spot for Toronto last week against Montreal, it is that local players in Toronto are getting a chance to play. For example, Jahkelle Marshall-Rutty is the seventh youngest player in MLS history to get his first career assist.

Yes, many of these players did not play well against Montreal, however, a lot of these players also played extremely well against defending Liga MX champions Club León. For example, Alex Bono, who did not have a great game against Montreal, had a terrific game against León. This was especially true in the second leg when Bono made a huge save late in the second half.

Players to watch out for at Exploria Stadium

Lastly, on the defensive end, there is Auro Jr. and Chris Mavinga. Auro Jr. played very well against  León. Also, Mavinga was probably the second-best player in Toronto last year behind only Pozuelo. He was one of the 47 players listed for the 2020 Landon Donovan Most Valuable Player Award, which was eventually won by Pozuelo.

How did Vancouver do in their last game?

The Vancouver-Portland game was a very even game. Both teams had two shots on target. Vancouver had slightly higher possession (52 percent to 48 percent) and passes completed than Portland. The Whitecaps also had five corners compared to Portland’s two corners in the game. Vancouver’s advantage with corner kicks played a big role in the Whitecaps getting all three points.

Canadian player Lucas Cavallini headed the ball past the Portland Timbers goalkeeper Steve Clark and into the back of the net. The one credited with the assist was Cristián Gutiérrez, who made a terrific corner kick that resulted in Cavallini scoring the lone goal of the game. This is what Whitecaps head coach Marc Dos Santos said about the goal:

“The highlight of the goal for me is our staff,” Dos Santos said. “When I mean our staff, our analysts – Luke [Summers], Drew [Foster], Phil [Dos Santos]. All the guys that work hours and hours on set play situations.”

Players to watch out for at Exploria Stadium

Looking at the Whitecaps last year, Cavallini is their most dangerous player. He led the team in goals last year with six including scoring four game-winning goals. Ali Adnan was the co-leader in assists last year with five. He also had two goals last year. There is also the 2019 Whitecaps  Player of the Year Maxime Crépeau. The starting goalkeeper for Vancouver had a stellar season in 2019 and was looking to continue that in 2020. Unfortunately for him, an injury caused Crepeau to play only 3.5 games last year.

Lastly, there is Cristian Dájome, who along with Cavallini were the only two Whitecaps players on the Landon Donovan MLS MVP Award preliminary list of 47 MLS players. He had three goals and four assists for the Whitecaps last year.

There are actually a few injuries for each team this early during the season, in particular TFC. This is a look at players that did not play against Montreal.

Before TFC fans get alarmed with the injury issues, TFC head coach Chris Armas said that most of the injuries are minor, and the reasons for them include COVID-19, different fitness levels, and a coaching change.

Michael Singh of Waking the Red also revealed that only Julian Dunn and Ifunanyachi Achara are on the injury list for TFC for the next six weeks on April 16. The other players are expected to make a return sooner rather than later.

Looking at the Whitecaps, goalkeeper Thomas Hasal is out with a concussion since September 20, 2020. There is also Ali Adnan, who has been out since January 12, 2021. The status of both players is unknown according to transfermarkt.

They faced each other three times last year. All three games took place in MLS Phase One, where Toronto won the season series with two wins and one loss against Vancouver. This game will be the only MLS season game played between the two teams. The game will take place on Saturday, April 24, 2021, at 3:00 p.m. ET in Exploria Stadium. The game will be televised nationally in Canada on TSN1, TSN4, and CTV.