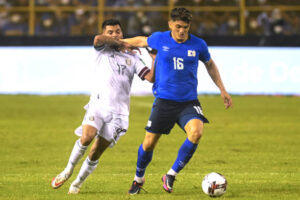 We’ve finally made it to the final round of CONCACAF World Cup Qualifying matches. It’s been an incredible cycle that has seen its share of shocks, fun games, good goals and typical CONCACAF foolery. One of the final games sees Mexico hosting El Salvador.

El Tri look to end the cycle on a high while La Selecta play for pride.

Tata Martino’s team have prioritized points over performance. They’ve also started this Qualifying cycle on fire before limping towards the finishing line. It was a tough end to 2021, with back to back losses to USMNT and Canada. But since then, El Tri are five games unbeaten with three victories. Their latest was a 1-0 win at Honduras to keep level on points with United States for second.

So the math is simple: a Mexico win + USMNT loss/draw against Costa Rica gives Martino’s men second place. Anything different and Mexico are third in what would be an underwhelming qualifying cycle. Players such as Hirving Lozano and Jesus Corona will need to be on their A-game in order to put the game away early. It took 70 minutes for Mexico to get the lone goal against Honduras, a header by Edson Alvarez from a corner kick.

El Salvador: Playing out the string

Given everything we’ve seen from El Salvador in this cycle, it was always likely La Selecta were far from the leading pack. Sitting in sixth, Hugo Perez has squeezed all he could from a team simply not good enough to keep a good thing going. Winless in four out of five games, it’s unlikely El Salvador can cause an upset but they can still bring problems to Mexico.

Cristian Gil scored his first goal in this cycle, but it wasn’t enough in the 2-1 loss to Costa Rica. Couple that with an inability to control games and it’s lead to the downslide La Selecta are currently enduring. It’s been a nice ride throughout qualifying with some historic moments but it’s all about to end soon. After this game, Hugo Perez and other members will need to sit down and see where improvements can be made for future tournaments and the next World Cup. The feel-good factor is gone, and after Wednesday, things will need to be evaluated.