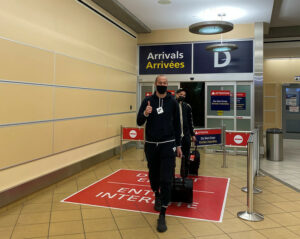 PREVIEW – The CanMNT is set to return to the pitch on Friday, this time with a pivotal fixture in Edmonton against Costa Rica. Canada is looking to continue the momentum it built after a very successful international window in October. The Canadians took care of business on the road, including a draw in Mexico at the Azteca. Les Rouges capped off October with a dramatic 4-1 home win over Panama.

On the other hand, Costa Rica is coming into the match following a mixed bag of results. After a draw away to Honduras and a home win over El Salvador, things were looking up. However, despite a goal exactly one minute in against the U.S., where they lost 2-1. Costa Rica currently sits in fifth place, four points back of Canada for the third and final automatic qualifying spot.

Costa Rica is a team Canada must not take lightly. Los Ticos have qualified for every world cup since the turn of the millennium (except the 2010 FIFA World Cup). Despite some of their core players like Bryan Ruiz ageing, and thus not being at their peak physically, this is a team that knows how to grind out results in tough environments.

Edmonton should prove to be exactly that for the Costa Ricans. Despite no snow in the forecast, temperatures are expected to approach 0 degrees Celsius. This is obviously not an ideal playing condition, especially when the bulk of your roster plays club football in Costa Rica. Another benefit for Canada is that Costa Rica will be without star keeper Keylor Navas. The standout keeper is currently injured and will stay with his club, PSG, over the international window.

On the Canadian side of things, health will not play as big a factor as it did the last window. Yes, Scott Kennedy and Junior Hoilett are still ruled out, but Canada will return many first-team players to the side. Keeper Milan Borjan is ready to play after recovering from COVID-19. Besiktas’ Atiba Hutchinson and Cyle Larin are back to being fully fit. Also, Whitecaps striker Lucas Cavallini could be ready to see some game time.

A product of @ChelseaFC
Now shining at @KRCGenkOfficial

Welcome to the brotherhood, Iké

Canada has also added another forward to its roster, by way of commitment from a dual national to the program. Ike Ugbo of Genk in Belgium’s top-flight chose to represent Canada over England this past week. The former England U20 international adds yet another attacking option for John Herdman.

“Your wildest dreams can come true”

Canada making its return to Commonwealth Stadium is going to be a special occasion for Alphonso Davies. The Bayern Munich star grew up in Edmonton, spending ten years in the city before joining the Vancouver Whitecaps academy. Davies has yet to have a match in Edmonton with the national team since he burst onto the scene. This should be a special homecoming for Canada’s brightest star.

Costa Rica is a slower team, and that suits Canada very well. The Canadians love to attack opponents down the wings with their pacey wide players. With slow legs and no Keylor Navas to mask those weaknesses, Costa Rica could be in for a rough night. Anything can happen, and Canada has been slow starters in this qualifying cycle. It is very possible Los Ticos get an early goal and set up a low block Canada can’t solve in the cold. However, all signs point to another Canadian win at home.

Photo credit to Canada Soccer on November 8, 2021, in Edmonton, Alberta.