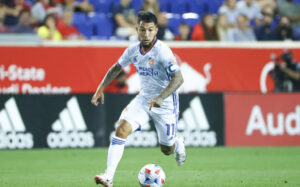 Preview — The New England Revolution have only played FC Cincinnati since the latter joined the league and the away team has always won. The Revolution reigned victorious twice in Cincinnati but the only previous Foxborough meeting went the way of the underdog. Going into it even deeper and amazingly so, no side has even managed to score on home soil yet. Will Bruce Arena’s men be able to change that at Gillette Stadium tomorrow?

Despite being relatively new to MLS, FC Cincinnati have had some very low lows including this run of nine games without a win. To make matters worse, this is the second time they’ve gone this long without tasting the sweetness that is three points. The team from Ohio will travel to face the frontrunners New England in search of an elusive victory and so the likelihood of them experiencing any joy is hardly strong.

To counteract this unwanted run for Jaap Stam’s Cincinnati is that the Revolution boast a contrasting one of their own. Seven of the last games have been wins for the Shield hopefuls, the other being a 0-0 draw against this impressive Nashville team. The most impressive conquests of the run include putting five past Phil Neville’s Inter Miami as well as scoring three against both the Red Bulls and, in their last game, Hernan Losada’s DC United.

The last few results for the Revolution have come in the absence of talisman Carles Gil too, the Spaniard is out injured and his manager has certainly kept his cards close to his chest. There is little news about the health of Gil, but if he returns to action soon then his bid to be named as Landon Donovan MVP will remain alive and well. The All-Star game against rivals from Liga MX is just days away now too so his place in that side is very much in jeopardy, Lucas Zelarayan in line to profit from this.

Seattle are nine points behind New England in the overall standings whilst Nashville are the closest competition in the East. An overwhelming fourteen points separate them from Gary Smith’s side and so although it is still early days, any side wishing to topple the Revolution have a mountain to climb.

Down, but not out, are FC Cincinnati

On the other hand, FC Cincinnati are wallowing down in 25th in the race for the Shield. Only expansion team Austin FC and a transitioning Toronto FC sit below, the latter bringing up the rear in both the Eastern Conference and the main table. Five draws in their last six might show that change is on the horizon in Cincinnati, in their last four games they have conceded only one goal but with only one going in at the other end too.

Arnor Traustason will miss this one having been sent off against DC last time out but in terms of injuries, a fairly clean bill of health remains to be the case for the Revolution. The aforementioned Gil is of course the big name plus Luis Caicedo has been absent for a while now. FC Cincinnati are in a similar boat with the majority of their players at the disposal of former Man United defender Stam. Allan Cruz faces a suspension like with Traustason but his is for yellow card accumulation instead.

Gil is actually one of four players in the All-Star mix, star goalkeeper Matt Turner being another thanks to head coach Bob Bradley. Striker Gustavo Bou has been banging in the goals recently and he is another of the LAFC manager’s thirteen choices. Finally, young Canadian Tajon Buchanan has had somewhat of a full breakthrough campaign and he has been named by MLS Commissioner Don Garber — Garber got two picks and chose Buchanan as well as San Jose’s Cade Cowell.

Last Words on Cincy vs. Revolution

It will be fascinating to see if the All-Star game has any bearings on the side that Bruce Arena selects for this MLS clash with FC Cincinnati. Regardless though, with all due respect, the Revolution should extend their run to nine games undefeated whilst making it a ten-game winless streak for the opponents.