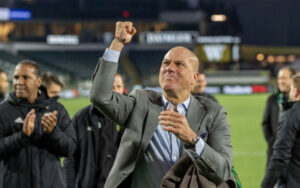 Real Salt Lake’s cinderella story is over. Meanwhile, the Portland Timbers’ comeback continues to live on. Portland clinched their third berth to the MLS Cup Final on Saturday night with a 2-0 victory against Real Salt Lake in Portland. With the win, Portland is set to host the final.

The hosting rights go to the team who is higher on the Supporters Shield standings between all conference teams. Portland — No. 4 in the West — is No. 5 overall. They will face either the short-handed Philadelphia Union or New York City FC, who are below the Timbers on the table.

Portland earned the victory over Real Salt Lake with an early goal in the fifth minute, courtesy of Felipe Mora. The Chilean international picked up a horrendous pass — technical terms would call it a clearance attempt — from Aaron Herrera and put it past goalkeeper David Ochoa.

In the second half, Portland put the final nail in Real Salt Lake’s coffin with an own goal from Ochoa, although it was technically credited to Santiago Moreno. Moreno struck the ball from outside the box, but it hit the post and then hit off Ochoa’s back and in goal.

Later in the second half, Herrera was given a second yellow card, sending him off the pitch. Real Salt Lake played a more defensive match after the red card, failing to get any chances past Steve Clark and being pressured by Portland.

“It’s an exciting day, being able to play this game here and win this trophy here with a performance against a very good team,” Giovanni Savarese said post-game. “I thought the guys today were fantastic. I’m proud of them. We need to continue to work, since we’re in MLS Cup Final… We’re going to enjoy this today.”

Portland now awaits tomorrow’s match against Philadelphia — who are missing 11 players due to COVID-19 protocols — and New York City FC to find out who comes to town for the MLS Cup Final. The final will be held on Saturday, Dec. 11, at 3 p.m. ET.

#RCTID with all the pressure early. Mora in the right place at the right time off Herrera’s clearance. pic.twitter.com/wvMFGSEspZ

The insurance goal that could see #RCTID host MLS Cup next week. Right now the box score has this as a Moreno goal rather than an Ochoa own goal. pic.twitter.com/9LN3dJ4Ora