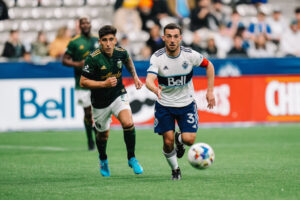 A rivalry spanning six leagues, nearly five decades, two countries, and one shared MLS expansion season, the Vancouver Whitecaps and Portland Timbers are quite familiar with one another. In fact, Saturday’s meeting at BC Place was the 100th all-time clash between the two sides. While Vancouver have the edge in the head to head, Portland has without question had a more successful MLS tenure. This year has started off no different, with Portland sitting with a 2-3-2 record in 7th place. Where as Vancouver are still finding their feet, with last week’s victory has them at 1-1-4 in 13th.

For Vanni Sartini’s men, it would be a 3-4-1-2 on Saturday afternoon. Thomas Hasal sat behind a back three of Cristián Gutiérrez, Ranko Veselinovic and Florian Jungwirth. Christian Dajome made his return to the starting 11, starting at full back, opposite of last week’s goal scorer Ryan Raposo. Sebastian Berhalter partnered with Russel Teibert in the centre of the pitch, with Ryan Gauld acting as the lone number 10. Brian White was accompanied by Deiber Caicedo up front, both of who were still searching for their first goal of 2022.

Meanwhile Giovanni Savarese trotted out a 4-4-1-1 for the third consecutive match. Aljaz Ivacic completed the back line of Claudio Bravo, Larrys Mabiala, Bill Tuiloma and Jose Van Rankin. Dairon Asprilla and Yimmi Chará played on the flanks, with Christhian Paredes and Diego Chara patrolling the middle of the park. Marvin Loira played as an attacking midfielder in behind the lone striker Jaroslaw Niezgoda.

A rather even yet free flowing first half wasn’t matched by the final offensive output. A handful of off target and blocked shots, mixed with poor final passes kept it 0-0 for the majority of the first half.

However a true strikers challenge by Dajome on Loira sent the Timbers midfielder crashing to the floor inside the penalty box. It didn’t originally warrant a call, however after a VAR review, the guests were awarded a penalty kick.

Dairon Asprilla stepped up for his first penalty effort of the year. And despite Hasal going the right way, the ball was tucked neatly into the side netting for the opening goal. A flurry of aggressive challenges and a few favourable set pieces squandered by Vancouver wrapped up what can only be described as an entertaining opening 45 minutes at BC Place.

In similar fashion to the first half, the start of the second was no different. Both sides had a handful of chances, including a disallowed goal by Deiber Caicedo due to a foul in the build up play. However 15 minutes after the break, Portland would double their advantage.

Niezgoda found himself on the left hand side on the edge of a box with some work still to do. A brilliant swift switch onto his left foot left Jungwirth flat-footed, allowing the Polish striker through on goal. A well taken finish past Hasal seemed as though the game was put beyond doubt.

Dajome redeemed himself however, when in the 76th minute he connected with a low cross from Caicedo. His first time effort bursted the back of the net for his first of the season, and instantly cut the Timbers lead back to 1.

GAME ON in Vancouver. pic.twitter.com/J4V6G78T7b

Yet no more than two minutes later, that two goal advantage was restored. Yimmi Chará was on the receiving end of a wonderfully placed through ball by Sebastian Blanco and was bellowing down on the six yard box. While shrugging off a challenge from Veselinovic, Chara stumbled but was still able to roof the ball into the back of the net in the 78th.

Would you believe me if I told you that this is where the game takes a twist? VAR came back to haunt Portland in the 87th, or so they thought. Dajome had a chance for his second of the night when the referee pointed to the spot for a penalty in the 87th minute. His effort was denied by Ivacic, as was the follow up attempt.

7 minutes later, Vancouver would rue to miss that chance. Another penalty was awarded. This time for Vancouver in the 94th minute. Up stepped Ryan Gauld, who put the ball away as if it were on a string to the top corner. However that penalty conversion only made it 3-2, and time had just ran out on this one.

corner from the penalty spot