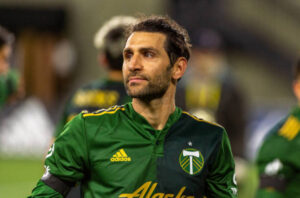 The game got off to a frenetic, almost frantic start. Portland tried to play the ball into the half spaces and out wide before finding Felipe Mora with the final ball. Club America started out pressing the Timbers before settling into spells of possession. Both teams got the ball in good areas in transition.

The match turned on its head just before halftime. Claudio Bravo was rightly called for a penalty, taking down Richard Sánchez in the box. The Roger Martínez penalty was well taken, making it 1-0 to the visitors at half.

The second half intensified like it was a playoff game, and there was plenty of Concacaf-ing to be hand.

Minutes into the half, Portland had chances in waves. Yimmi Chará had several chances. Dairon Asprilla nearly tied the game with a chip to the back post, that ended up hitting the post.

After that, Concacaf after dark set in, with a wave of yellow cards for both teams and Club America wasting time at every opportunity.

Portland pushed in the final 15 minutes. After several chances and spoiled opportunities, they got a lifeline in the final minute of stoppage time, winning a penalty on a foul in the box after a chaotic sequence in front of David Ochoa’s goal.

Felipe Mora stepped up to take the penalty, sliding it into the bottom right corner to make the final score 1-1.

Mora scores from the penalty spot in the last minute of the game. | #SCCL21 pic.twitter.com/JcQ6HeQDcm

Decent performance, ok result: It looked like this game was going to be another decent performance with a sour result for an MLS team against Mexican opposition. The penalty in stoppage time turned the tie on its head. Portland are still going to be fighting an uphill battle in the second leg down in Mexico City, but Mora’s goal gives them something to build on.

Roger Martínez penalty then rage quit: Martínez played a great game through 75 minutes. He led the line and created chances for America, and scored the penalty. He did receive one of NINE yellow cards in this game, getting suspended for the second leg in the process.

Full Concacaf: Good lord readers, I love-hate this competition. The whole journey of this game went from up tempo playoff game, to tight and feisty CCL match, to Club America doing nothing but Concacaf-ing, to Club America getting Concacaf’ed in the end. No idea how the second leg will play out, but I can’t wait for it.