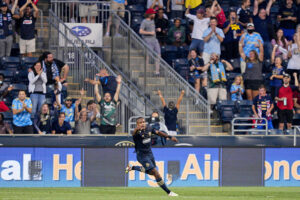 The Philadelphia Union wins big against Toronto FC. This was in large part because of the first half as the Union scored all three goals in the first half. Credit should also be given to the Union’s defence, which only allowed TFC one shot on goal.

Toronto FC’s defence was not good in the first half

TFC’s defence in the first half cost them the game. Within the first 23 minutes, the Union had five shots, with three of them on target. Kacper Przybylko had the first shot of the game in the ninth minute for the Union. They would get two more shots in the ninth and 11-minute of play. In all three plays, TFC had problems with passes or crosses that entered in the box.

12′ Jakob Glesnes adds an early goal for #DOOP! Daniel Gazdag is credited with the assist.#PHIvTOR | 1-0 | #MLSpic.twitter.com/oqvKTpCUVc

These problems cost TFC in the 12-minute. Dániel Gazdag’s cross following a corner into the box ended up with a Jakob Glesnes header into the back of the net. These problems would persist throughout the first half for TFC, but credit should be given to Philadelphia’s defence.

Philadelphia Union’s offence was spectacular in the first half

The Union continued to pressure TFC’s defence throughout the first half. They would get two shots in the 29-minute, including a 29-minute shot from Sergio Santos, which was saved by TFC goalkeeper Alex Bono. Santos would then draw a penalty for his team in the 29-minute.

32′ Daniel Gazdag doubles the lead for #DOOP with a converted penalty!#PHIvTOR | 2-0 | #MLS pic.twitter.com/M2GhDzgRDS

The 32-minute goal by Gazdag was well-taken. Gazdag’s shot went into the top corner and gave the Union a 2-0 lead. This was Gazdag’s first-ever goal in MLS.

Philadelphia would score the third goal just four minutes later. Santos got a breakaway and put the ball into the back of the net. The game ended the same way the first half ended, with the Union winning 3-0 over TFC.

Toronto FC did not have many chances to score

Toronto did not play well, especially in the first half. They did though have two good scoring opportunities in the first half. In the 25-minute, Richie Laryea’s shot from the centre of the box missed to the left. Then in the 30-minute, Kemar Lawrence’s shot from very close range went high. TFC though had a chance to get closer as Richie Laryea got awarded a controversial penalty for his team.

It was a savable penalty shot from Yeferson Soteldo. However, take nothing away from Union goalkeeper Andre Blake. His read of the shot and guessing the right way played a role in Philadelphia’s win. The only shot they attempted after the penalty shot was Altidore in the 53-minute, which was off-target. TFC would not get another shot for the rest of the game.

The Union was clearly the better team against TFC. Their offence showed up at home in Subaru Park in Chester, Pennsylvania. The defence of the Union was also solid, and Blake stepped up big in the second half for Philadelphia.

“We know it is never a straight line going up, there are always some ups and some downs”

The current situation for both Canadian MLS teams

As seen above, there is no panic yet with Toronto. They have shown improvements since Javier Pérez became the head coach of TFC, but their defence continues to be a problem. However, TFC has the second-worst record in the MLS Eastern Conference and in MLS (Chicago Fire FC has the same number of points but holds the tiebreaker over TFC with goal differential). They are 10 points behind sixth-place D.C. United and seventh-place Trillium Cup rivals Columbus Crew SC (D.C. holds the tiebreaker via more wins than Columbus), which are the last two MLS Eastern Conference playoff spots. This is while Philadelphia is third in the MLS Eastern Conference. They have 28 points and are one point behind second-place Orlando City SC in the Eastern Conference.

However, their placement in the standings is very fragile. There are many teams close to them and all of them have played at least one game less than Philadelphia. Nashville SC has played one less game and is tied in points with Philadelphia (Philadelphia holds tiebreaker via with more wins than Nashville). Then there is New York City FC, which is only one point behind Philadelphia while playing two fewer games than the Union.

The schedule for both teams has been revealed. The Union will play the New England Revolution on Sunday, August 8 at 6:00 p.m. ET at Gillette Stadium. This is while TFC will play against at home in BMO Field against New York City FC. The game will take place on Saturday, August. 7 at 8:00 p.m. ET.  Fans can watch the Philadelphia game on MLS LIVE on DAZN, PHL17, and TV38 & myRITV. This is while Toronto fans can watch the TFC game nationally in Canada on TSN4. The game is also available on the YES Network.