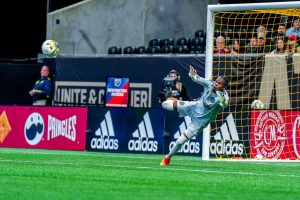 Philadelphia Union clinched a Concacaf Champions League berth, but in perhaps the most underwhelming fashion imaginable, courtesy of a goalless draw away to Atlanta United.

With two games to go in the regular MLS season, had the Union won at Mercedes-Benz Stadium then they would’ve sealed top spot in the Eastern Conference.

As it happens, they didn’t. And all things considered, were perhaps fortunate to come away from their clash against The Five Stripes with what could prove a pivotal point.

Far from doom and gloom

It was frustrating to see CF Montreal clinch a victory over New England Revolution by a sole goal, courtesy of a 72nd minute Alastair Johnston winner. However, the Union’s fate is still in their hands.

With two games to go, the last of which comes at home to a Toronto team with nothing to play for, the Supporters Shield is on the verge of being sealed.

A place in the playoffs may be slipping away from Charlotte. Charlotte are a side who are looking to win their three remaining games to cap off a phenomenal expansion season. A superb comeback win, from two down away to Chicago Fire, which included a 96th minute winner has The Crown believing that they can go toe-to-toe with Jim Curtin’s side.

Whilst three points would’ve been ideal for Philadelphia heading into the clash in North Carolina, they clinched a draw against Atlanta thanks to a superb defensive display.

It’s no surprise to see that the side that has conceded the fewest goals in MLS sits at the top of their conference. That isn’t the case in the Western Conference, mind you, as FC Dallas sit in third spot but aren’t quite as prolific offensively as the superstar squad being assembled at LAFC.

But it’s not rocket science to suggest that the fewer goals you concede, the more chance you have of picking up points on a consistent basis.

Couple that with the most prolific attack in the division and it’s a recipe for success. However, it’s fair to say that the Union’s defensive ingredients were of greater importance at the weekend. None more so than goalkeeper Andre Blake who pulled off several stunning saves to clinch his 14th clean sheet in 32 games.

Here’s where the East stands after Week 32.

The opening exchanges were quiet at the weekend, but it was the hosts that looked more like breaking the deadlock. Thiago Almada had the best chance of a quiet first half, sliding past Blake’s left-hand post.

But Gonzalo Pineda’s side evidently took their half-time instructions on board. Atlanta flew right out of the traps in the second half but ultimately to no avail.

A glorious chance on 50 minutes perhaps summed up how solid the visitors are defensively. Two of Atlanta’s designated players combined as Almada slid Luiz Araujo down the left flank. A wonderfully weighted pass found Brooks Lennon who looked to control and smash past Blake.

The Jamaican responded but could only parry into the path of Dom Dwyer. He appeared to have the easiest of tasks and smash into a seemingly empty net. However, Jakob Glesnes was on hand to prevent Dwyer with a superb sliding challenge. The Norwegian prevented the ball from trundling in. The goalkeeper would gather and the clean sheet – somehow – remained intact.

Ronald Hernandez was next to try his luck, but shot straight at the Philly goalkeeper who was covering for injured captain Alejandro Bedoya by carrying the armband. Araujo shot high and wide before Brooks Lennon cut in and shot the down the goalkeeper’s throat.

Substitute Edwin Mosquera came off the bench and drove at the defense with purpose. However, the Colombian couldn’t find a way past the Reggae Boyz keeper. Amar Sejdić hit the post from range – as Blake was rooted to the spot – before Brooks Lennon set up Santiago Sosa and the Argentine ballooned over the bar.

The visitors could’ve snatched all three points late on to seal top spot. Jack McGlynn sent in an inviting cross for Leon Flach but the former St Pauli midfielder nodded over the crossbar.

However, a matter of seconds later Almada and Lennon linked up. The latter found Atlanta’s main marksman Josef Martinez, off the bench to potentially be the hero. But a super stop from Blake denied the substitute before Jack Elliott hoisted clear.

Every team has off days, but perhaps it’s tricky to work out why the Union’s came in this one considering they’d won 11 of their previous 13 games heading into this one.

Club captain Bedoya is a big miss but isn’t often among contributions in either goals or assists. He’s scored just six of their 68 goals scored in Eastern Conference matches so far.

The Union had bagged 23 goals in their last five league fixtures before Saturday’s stalemate. They’re the best offensive and defensive team in the entirety of Major League Soccer so there’s no reason to get too disheartened whatsoever.

It’s the first time that the Union have played out a goalless draw since the Fourth of July.  Neither side scored in the meeting with Columbus Crew in Ohio, where they took their frustrations out on DC United in a 7-0 victory the following week. However, they play Mexican side Pachuca in a friendly this weekend.

Having already beaten Charlotte 2-0 in Pennsylvania back in April, they’d love to repeat the feat and seal top spot.

The post Philadelphia Union should be pleased with a point against Atlanta United appeared first on Last Word On Soccer.