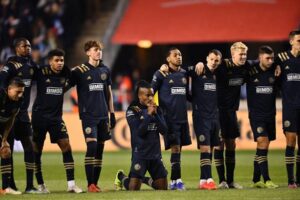 The old foes meet for the fourth time this year. The playoff bout will break the match-up equanimity which has seen one victory a piece and one draw between them this season.

The pair faced off as recently as November 7th, where they drew 1-1 at Yankee Stadium on decision day. August 18th, Philadelphia eked out a 1-0 victory at home in Pennsylvania with a 67th minute goal from Alejandro Bedoya. May 1st, NYCFC stole the points away at Subaru Park with goals from Valentin “Taty” Castellanos and Jesus Medina.

Given roster absences for both sides, the history of the match-up, and the parity of results they garner, what’s certain is this will be a close match. What’s likely beyond that is that it will not be pretty.

Philadelphia Union and NYCFC will Both Miss Players This Sunday

Both clubs are set to take the field less a number of key players. For NYCFC it will likely just be one, particularly vital player. For Philadelphia it will be a COVID-induced batch of eleven.

NYCFC will face Philadelphia missing their most lethal attacking talent in Valentin Castellanos. Castellanos will sit sidelined for the conference final following a red card accrued in Boston. Shortly after scoring an overtime goal against New England in the conference semifinal, Castellanos picked up a second yellow that will nullify the threat of his abilities this Sunday.

Animal on the Loose

NYCFC Manager Ronny Deila seems undaunted by the loss. “We have at least two, maybe three players who can play that position… We can also play a false nine. So we have options.” While that may be true, it’s also true Castellanos has been the goal scorer in both of NYCFC’s playoff victories. And against Philadelphia, Castellanos was a goal contributor in two of their three detentes.

The solution to his absence may require an amalgamation of other players. The most obvious replacements – such as Brazilian striker Héber Araujo dos Santos, returning from injury- haven’t gotten the minutes to determine fitness or form.

The good news for New York is the rest of their squad remains intact.

As for Philadelphia, head coach Jim Curtin relayed to media Friday that ‘a number’ of players were in league health & safety protocol following COVID related exposure of indeterminate size and nature. Adamant not to reveal specifics of who, how many, or what exactly took place, Curtin told media the Philadelphia Union would need to adapt and take the field without a full strength roster.

Dismay and speculation followed the announcement, with hints from those who may know that the number of absences would be deep.

Difficult situation for @PhilaUnion & their Covid situation because the @MLS protocol states “10 days out after positive testing”.
Which would mean whoever is out on Sunday misses #MLSCup most likely barring an odd case.
Tough spot for all involved and the number is

Union beat writer for the Delco Times Matthew DeGeorge scouted practice Friday following the announcement. Caveating that players might not be on the field for any number of reasons, DeGeorge posted a photograph to social media of a vastly diminished roster missing several starting talents and squad leaders, including Andre Blake and Alejandro Bedoya.

Please believe me when I say this is not how I want to spend my day. But alas
Left to right, Gazdag, paxten, Harriel, Fontana, McGlynn (ball near head), not sure whose foot is on the ball, Mbaizo, Sullivan I think (ball in hand), Jamiro far right pic.twitter.com/FRLfqjI92c

Curtin assured media the Union have always had a next man up mentality, that they would adapt, and that sometimes a group of men or women with nothing to lose is a dangerous thing.

Saturday morning Philadelphia published their match notes with a confirmed list of players to miss the match. The list include eleven players in total, including several starters. Perhaps most devastating is the absence of Andre Blake, the legendary goalkeeper and arguable team MVP who saved two penalties last week against Nashville.

Eleven Union players are in MLS’ health and safety protocols, according to the team’s game notes that were just published:

Philadelphia May Need to Rely on Academy Talents

Notably, among the players seen practicing Friday were the teenage academy talents who’ve already proved capable of grasping the mantle of opportunity and responsibility to put goals in the net in key minutes of key games. That includes late goals from Paxten Aaronson to steal victories and draws in the regular season, and a particularly smooth penalty from Jack McGlynn in the Union’s last match against Nashville.

“When a young kid says ‘𝐈 𝐰𝐚𝐧𝐭 𝐨𝐧𝐞,’ you reward him with it.” – Coach Curtin

Should eighteen-year-old academy products like Jack McGlynn or Paxten Aaronson salvage Philadelphia from disaster and rally a COVID beleaguered squad into the final… Well, that would be a story you couldn’t write better if you tried. And it would be a very Philadelphia Union story to transcribe.

After their first playoff match Jim Curtin remarked to media that the style of their win and nature of their play ‘set the game of soccer back 10 years’. Philadelphia has been a successful team by several measures this year. But one could argue their performances have been less than beautiful. What they’ve been instead is pragmatic and well-coached. Their style revolves around a defensively sound, aggressively pressing, determined mentality intrinsic to the city on whose outskirts they play.

New York City FC will take the field absent their most lethal attacking talent. But as Jim Curtin himself put it to media, they do have depth, clear management and direction, as well as a winning mentality sure to put Philadelphia’s own depth to the test.

The game will kick off 3 PM Eastern Time on ABC and ESPN Deportes. Color me romantic, but I’m predicting a 2-1 overtime victory for Philadelphia. Goals from teenage academy talents Paxten Aaronson and Jack McGlynn.