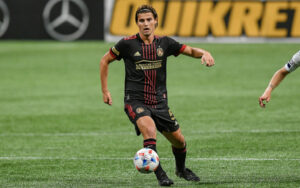 Chester, Pennsylvania — Atlanta United crashed out of the CONCACAF Champions League at the hands of Philadelphia Union on Tuesday night.

A Santiago Sosa wonder goal in the second minute of first-half stoppage time — his first career goal — looked to get the Five Stripes on their way to a remarkable comeback win. But the Union put in a resolute defensive performance, while Kacper Przybylko scored his third goal of the tie overall to put his side into a first-ever CCL semi-final.

Here are three things we learned about Atlanta United from Tuesday’s match.

Despite some tough results, there has been plenty for Atlanta United fans to be excited about during Gabriel Heinze’s first few games. Nothing quite tops the feeling around deep-lying midfielder, Santiago Sosa.

The Argentina youth international has been mesmeric at the base of Heinze’s midfield. Whether it’s distributing long diagonals, gliding through pressure or positioning himself perfectly to make match-saving blocks, there isn’t much missing from Sosa’s locker. However, the one thing he hadn’t managed prior to Tuesday night was score. In fact, the former River Plate man was without a goal through his entire career so far.

But that all changed at Subaru Park when, on the stroke of half-time, Sosa received a Marcelino Moreno pass and spun beautifully away from Leon Flach, before dispatching an inch-perfect finish into the far corner. Had you merely glanced at a replay, you’d be forgiven for mistaking the effort for a Lionel Messi goal.

Heinze has been receiving glowing reports from his players during his short time in charge so far. However, something he is yet to iron out is his side’s ability to deal with crosses, something that cost them in the first leg of this tie, as well as against New England Revolution at the weekend.

Those crosses proved to be something of a nuisance again on Tuesday.

According to SofaScore, the Union delivered 20 crosses on the night but rather than good defending keeping them out, it was often bad luck or slightly overhit deliveries. All too often, the Five Stripes allowed Union forwards to run free at the near post, barely missing the ball on a number of occasions. Of course, it was Cory Burke’s 88th-minute cross that evaded the Atlanta defense to allow Przybylko to kill the tie.

Clearly, this remains a problem area for Heinze. One he needs to solve quickly to get this undoubtedly talented team competing.

3. Josef’s lack of sharpness is hurting

Josef Martinez managed another 78 minutes on Tuesday night in his seventh appearance of the season in all competitions. While this is undoubtedly a positive given his long injury absence, it also shone a light on how far away he is from full fitness.

The Venezuela international often cut an isolated figure, touching the ball just 27 times on the night and failing to attempt a single shot.

Sure, the service to him wasn’t great and the Five Stripes do need to work on their final ball. But Martinez is also lacking the famous energy and explosiveness that has allowed him to tear away from so many top-class defenders during his MLS career.

Nobody can blame Martinez. It’s a long road back to fitness. But his lack of sharpness is hurting Atlanta United all the same as it blunts their attack.