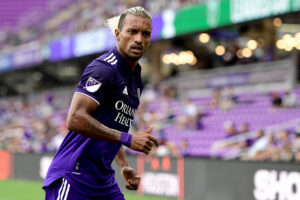 Foxborough, Mass. — New England came into this one with seven consecutive victories on home soil. Meanwhile, Orlando has been struggling on the road, a run of the same length without a win. This all pointed towards a win for Bruce Arena’s Revs, only to be enhanced by the absentees for Orlando. Three points are exactly what the Revs took from it!

Nani was denied from the penalty spot by Matt Turner in the Eastern Conference semi-final last season, a game which the Revs won. Nani failed to convert from twelve yards out again with the MLS All-Stars against that of Liga MX. With the game hanging finely in the balance at Gillette Stadium, Matt Turner had the Portuguese star’s number once again. Turner went down to one side but left his leg in the middle of the goal, exactly where Nani’s penalty was headed. He truly is the best goalkeeper that this league has to offer.

Gillette Stadium is also home to the infamous New England Patriots and that showed in the markings on the pitch, it looked unusually amateur in truth. Andreas Perea returned to action following his sending off in the loss to CF Montreal, the same can be said for Nani although he began this one on the bench. On the other hand, there weren’t any real surprise inclusions in the Revs’ line-up, Tommy McNamara getting the start in the ever-changing midfield ahead of Wilfrid Kaptoum.

A deep cross from Gustavo Bou picked out his strike partner Adam Buksa after less than ten minutes. The Pole has lacked the lethal finishing in comparison to La Pantera at points this season, but he made no mistake here, netting his twelfth goal for the campaign and giving the Revs the lead. The largest crowd of the season (23,506) were in the house for yet another New England win on this march to history.

Oscar Parejo’s side wasn’t trailing for long though. The ball was played into Daryl Dike who went full supernova. He held off Henry Kessler using his impressive strength and paired that with a rocket of a finish. Turner got something on the shot but the sheer power of it meant he was unable to keep it out of the net. Off of Turner, it looped up into the roof of the net and Dike had drawn Orlando level! He can do it without Nani on the field that’s for sure.

Too strong from Daryl

Turner came up with another of his big saves before his side retook the lead. Club Brugge-bound Tajon Buchanan wreaked havoc down the right side, running at Joao Moutinho with freakish pace and skill. He cut in and out before firing a ball into the box, towards Buksa, where the forward was being marshaled by Rodrigo Schlegel. The Argentine put through his own net to put his team up against it once again, goalkeeper Pedro Gallese being left with no chance. Buksa’s physical presence was a handful for Schlegel to deal with so the recently capped international deserves his credence for both goals.

Buksa was on hand to poke home a loose ball with about seventy minutes on the clock but he was quite clearly offside. Just moments later, at the other end of the field, Andrew Farrell brought down Dike in the box. The ref didn’t hesitate to point to the spot and with Nani having been subbed on fifteen minutes or so earlier, he stepped up to the plate. As previously mentioned, Matt Turner was a step ahead of Nani and denied the former Man United man from making it all square. It was a bizarre penalty save but an equally impressive one.

Both sides were still pushing and the closest either came late on was when Bou fired an effort off of the underside of the bar. Gallese was glad to see that it hadn’t crossed the line. From beating the Union to tying the defending MLS Cup champions Columbus, New England continues to march towards the Shield and a record points tally. Nani missing from the spot proved crucial as the Revs prevailed thanks to Buksa’s strike and a Schlegel own goal!