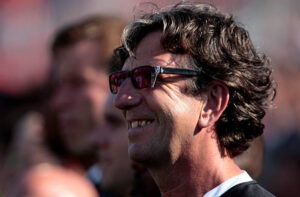 EDITORIAL – The icon that is Pele played for the New York Cosmos in the mid-70s and at a similar time, England’s World Cup winning captain Bobby Moore enjoyed time in San Antonio and Seattle. Fifteen or so years later, not long before MLS was inaugurated, a man named Paul Mariner graced U.S. shores.

Paul Mariner: A beloved footballer on both sides of the pond!

There aren’t many links between two of my favourite things in football; Plymouth Argyle and MLS, but Paul Mariner is one of them. Mariner followed a path that is a true dream in my eyes but earlier this week, it was announced that the former footballer had sadly passed away following a short battle with brain cancer. Here is a piece exploring his wonderful life!

I am a Plymouth Argyle fan reporting on the Revs who has an interest in the English national team and Arsenal, yet my lack of knowledge about Paul Mariner is apparent. His professional footballing career began with Argyle down here at Home Park and his name is still etched into the stadium as we speak, Mariner being among the likes of David Frio, Paul Sturrock and Tommy Tynan to be named and remembered on the concourse’s hoardings. Mariner is often talked about as one of the greatest ever players to don the green and white of the best team in Devon and this is a legacy that will forever live on.

His success down south earned him a spot in Argyle’s team of the century but he then elevated to a whole ‘nother level for Ipswich Town. He continued his prolific goal scoring at Portman Road, lifting an FA Cup and a UEFA Cup under the stewardship of the beloved Sir Bobby Robson. He netted nearly 100 times having played 260 times in a spell that spanned nigh on a whole decade. On top of that, the majority of his 35 England caps came during his time with the Tractor Boys, despite the stature of his next move.

It was a couple of years in the capital, playing for the world-renowned Arsenal pre-Arsene Wenger, that awaited Paul Mariner next. He closed out his English football career with this brief stint at Highbury before another, equally short spell, playing for Portsmouth. This wasn’t the end altogether though as he went on to play just twice for Australian outfit Wollongong City. Then, as previously mentioned, Mariner went stateside.

He hardly made a plethora of appearances in the States but Paul Mariner was with Albany Capitals and San Francisco Bay on a true coast-to-coast experience for a few years. Having wound down his playing career in two marvellous but polarising parts of the USA, he undertook various punditry roles back home in England as well as getting some coaching experience under his belt. His first taste of that life came in America and that was ultimately where his first concrete steps took place with Harvard University beckoning.

Shortly after taking said role in Massachusetts, Scot Steve Nicol who previously played for Liverpool brought him to the New England Revolution as an assistant. During his time with the Revs, the club won a U.S. Open Cup and the North American SuperLiga, their only two honours to date! A return to Argyle then awaited Paul Mariner and he was in good company, Paul Sturrock and Peter Reid managing either side of his stint as well as Tony Pulis and Ian Holloway closely preceding him too. His last step on this stage of his footballing journey took him to Toronto where he enjoyed a couple of varying job titles.

It truly has been a clash of worlds in the last two or three days with MLS players turned commentators Taylor Twellman and Charlie Davies, former England goalkeeper Peter Shilton and a number of Argyle legends being amongst those to come together and share the love they had for Paul. Charlie Davies’ words in particular stood out to me, the pair’s paths crossed when Charlie was an up-and-coming player and then the pair shared the commentary box as recently as 2020. Paul Mariner clearly had an impact on so many peoples lives.

As a young Argyle fan, Paul is a man I’ve heard so much about, I’ve seen older fans waxing lyrical about him and it just goes to show how widespread his adoration goes. On top of the talk about him down in Devon following the sad news of his passing, there has been a wider ripple effect up and down the country from Wembley to Home Park, Portman Road to Fratton Park. Adding to that there is of course the outpouring of emotion in the U.S. too, people that worked with him as a pundit and as a commentator and even as a coach too. Paul Mariner is certainly a man who deserves to have his life celebrated!

The post Paul Mariner: A beloved footballer on both sides of the pond! appeared first on Last Word On Soccer.