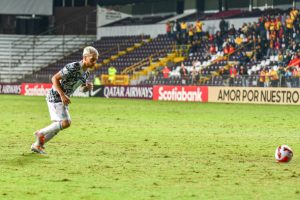 HEREDIA, CR – Pacific FC played valiantly. They were a goal down to start the game and were also a man down for most of the second half. However, the team from Langford was somehow able to make the game interesting and push it to penalties, where C.S. Herediano would emerge victorious at Estadio Eladio Rosabal Cordero.

Pacific FC played valiantly but did not advance

We gave EVERYTHING we could tonight

It’ll sting now but there are lots of positives to take from our first @Concacaf adventure!

And don’t worry, we’ll be back on the continental stage again soon

Full Game Summary:#ForTheIsle took advantage of their scoring opportunities.#SomosElTeam’s goalkeeper Esteban Alvarado was the best player in the game.#PacificFC’s Jamar Dixon got a red card early in the second half.#CSHvPAC | 0-1 (1-1) Penalties: (6-5) | #SCL22

Second Half and Penalties

Pacific had to press on and Alvarado played spectacularly. It looked like the game was all but lost. However, Pacific FC played valiantly throughout the second half, and it resulted in a goal by Gianni Dos Santos. The key to the goal was Dos Santos reacting immediately to the ball coming to him. Additionally, the accuracy of the shot was able to get past Alvarado to take the lead on the road. More importantly, it tied the aggregate as the game went into penalties.

It looked like after Miguel Basulto did not convert his penalty the Pacific could actually advance in the Concacaf League. However, six-straight penalties converted by C.S. Herediano combined with a couple of Pacific FC penalty shots being stopped was the difference in the game. Callum Irving might feel that he could have stopped the second-last penalty, as he guessed in the right direction, but was just out of reach.

Pacific FC was not the better team in the first half. C.S. Herediano in all truth should have converted some of those chances into goals early in the game. As a result, the game was in the balance in the second half as Pacific did just enough defensively.

In the second half, it felt that C.S. Herediano got a bit tentative, despite having a glorious scoring opportunity straight after Pacific got a red card. Pacific, though, did lose the two-legged tie, and as a result, will not represent CPL or Canada in the Concacaf Champions League next year. However, that is not taking anything away from Pacific. Costa Rica is a country known for its obsession with soccer and the CPL is still quite a young league that will only get better as time goes on.

Read More: The Relationship Between the Canadian MLS Teams and CPL

Pacific FC should have gotten a result at home. Pacific FC was the better team at home against C.S. Herediano, but never truly troubled Alvarado in the first leg with their scoring chances. This was something they did on the road leg, and it resulted in Pacific winning the road leg, but in the end, did not advance to the Concacaf League.

Esteban Alvarado was the player of the game. Alvarado made a few big saves throughout the game. The one in extra time that came to mind was Alvarado’s save against Bustos in the 70-minute (source: Concacaf). He also made two saves in the penalty shoot-out, this included Amer Đidić’s shot, which Alvarado had to stretch to make the save.

The post Pacific FC played valiantly, but lose in penalties in Costa Rica appeared first on Last Word On Soccer.