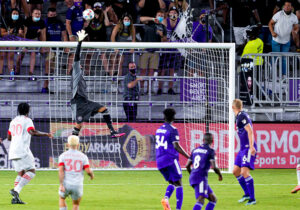 TFC was unable to capitalize on their chances with sixteen shots and six on goal.

Orlando City SC had 10 shots, with five of them on target. Yes, they might waste a few chances, but they had fewer shots on goal than Toronto. This included Tesho Akindele’s shot in the 49-minute. Silvester van der Water also got the first chance of the game in the eighth minute with a left-footed shot that was off-target. However, they were able to close out another game and remain unbeaten in MLS play so far this season.

There were two players involved in this play in the 12-minute. Silvester van der Water got his first-ever assist in MLS with a terrific cross. He found Canadian Akindele, who headed the ball into the back of the net and beat Toronto goalkeeper Alex Bono. A big congrats should be given to Water, who got his first-ever assist in MLS according to Orlando City SC’s Twitter account.

Their last chance in the first half was a Water shot that went directly to Bono. Then in the 53-minute Júnior Urso shot was too high and off-target. Besides the 49-minute, the 67-minute was probably the best chance for Orlando to extend the lead. Akindele’s shot in the centre of the goal was stopped by Bono. However, it is important to keep in mind that Chris Mavinga defended that shot quite well and made it difficult for Akindele to score.

Their last big chance came in the 85-minute when Antônio Carlos’s header from very close range was just a bit too high. In the 79 and 84-minute, both Kyle Smith and Benji Michel’s shots were saved at the centre of the goal.

Toronto FC did not take advantage of their chances

Toronto FC had 18 shots with only six of them on target. Taking into account that three shots were blocked. TFC still had 15 chances to tie the game. However, none of those shots resulted in a goal.

This was a heads-up play by Orlando City SC goalkeeper Pedro Gallese to save a deflected Auro Jr., shot. This would be the first of many chances Toronto had throughout the game. In the 32-minute, TFC had two shots, one from Yeferson Soteldo and another one from Jozy Altidore. Both of those shots missed the target.

It looked like Toronto was gaining momentum at the end of the first half. Jozy Altidore’s header was saved by goalkeeper Gallese in the 43-minute. Then in the 45+2-minute of play Auro had another chance to score, but his shot was off-target. However, the first four Toronto shots in the second half were all off-target. The best chances probably came in the 47 and 54-minute. Kemar Lawrence’s header was just a bit too high and Jozy Altidore’s shot from the centre of the box missed to the left.

Possibly their best chance to score was in the 90-minute. Ayo Akinola’s shot was stopped, but Jacob Schaffelburg had a follow-up shot. Unfortunately, he was unable to find the back of the net. TFC would have three more chances to score. This included shots on goal by both Nick DeLeon and Soteldo in the 90+6-minute. None of them went into the back of the net and Toronto now had only five points in six games.

Not enough can be said about Orlando’s defence. Yes, Gallese had a clean sheet and he deserves full credit for that. However, Orlando made some great defensive stops including preventing two shots from going into the back of the net.

A lot of these defensive plays can be seen in the second half. First off, Akindele played a big role in defending Michael Bradley’s shot in the 48-minute. As a result, Bradley shot was off-target. Then in the 64-minute, Sebas Méndez made a good defensive play to prevent Soteldo to advance on Orlando’s field of play.

In the 71-minute Schaffelburg’s shot was heading into the back of the net after beating goalkeeper Gallese. Fortunately for Gallese and Orlando, Rodrigo Schlegel was there to prevent the goal. This was probably the play of the game and is a big reason why Orlando won this game against Toronto.

Lastly, in the 54-minute, Jozy Altidore shot was heading into the back of the net. Orlando though was prepared for it as a few defenders were there to defend the goal line. This included Carlos, who cleared the ball and ended Toronto’s scoring opportunity. It is also important to note that Gallese had a clean sheet against Toronto. Yes, he got help from the Orlando defence, but he still had to stop six shots and gave his team the 1-0 lead.

And the club-record unbeaten start to the season rolls on.

This was an unfortunate game from a TFC fan perspective. They had more shots and shots on goal but were not able to get even a point against Orlando. At many points of the game, Toronto looked like the better team against Orlando. Unfortunately, for Toronto, the combination of not converting on scoring chances and Orlando’s terrific defence played a role in them losing. More worryingly, Jonathan Osorio is apparently injured and was substituted out of the game against Orlando. For Orlando fans though, this is terrific news. Orlando City extends their unbeaten team in the Eastern Conference and is currently second in the Eastern Conference. Akindele stepped up for Orlando and their terrific defence shined against Toronto.

Both teams will only play one more game before the International break. Orlando will play against the New York Red Bulls at Red Bull Arena in Harrison, New Jersey. The game will take place at 1:00 p.m. ET. Fans can watch the game on MLS Live on DAZN, MSG Networks, and Fox 35 Plus. This is while Toronto will look to win the Trillium Cup against rivals Columbus Crew SC on Saturday, May. 29 at New Crew Stadium in Columbus, Ohio. The game will take place at 3:00 p.m. ET. The game between Toronto and Columbus will be televised nationally in Canada on TSN and CTV. Toronto won the first meeting against Columbus at Exploria Stadium earlier this month.