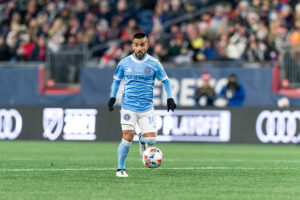 East Hartford, CT – Following six goals to start the round of 16, NYCFC’s offense keeps rolling with a 3-1 win over Guatemala’s Comunicaciones F.C. in the opening leg of the Scotiabank Concacaf Champions League.

Despite both sides finishing on a fairly even number of shot attempts with NYCFC at 13 and Comunicaciones at 16, it was New York who would dominate the opening minutes with opportunities and possession.

With the first real chance coming in the 19-minute it would be Santiago Rodríguez picking up a deflected pass and dribbling it into the box. Trying to find some space, Rodríguez has the ball knocked away by the Comunicaciones’ goalkeeper Kevin Moscoso. While Rodríguez hits the deck, the ball finds its way to Talles Magno for a slide-in goal just past an outstretched defender.

After some celebration from NYCFC and a review from VAR the decision was overturned and the goal cancelled out with play resuming 0-0 in the 21-minute.

Shortly following in the 29-minute it would be NYCFC’s Andres Jasson battling two defenders between the touchline on the right side of the box and winning the ball with a pass back to Rodríguez. With space and time from just outside the box, Rodríguez hits a one-time pass into a mix of players with Valentín “Taty” Castellanos cutting in front and getting a diving header to the cross making it 1-0 New York.

@NYCFC takes the lead over Comunicaciones

The Bronx Blues would see out their first-half lead with both sides finding a few more opportunities before the halftime whistle but none coming on goal for either team.

To open the second half it would be Talles Magno in the 50-minute receiving a pass on the edge of the box and sliding the ball to his right before a tackle. With the ball finding its way to Castellanos, the Argentinian takes one touch and has a shot on goal the rifles off the post.

But in the 54-minute it would be Comunicaciones finding an offensive spark as a narrowly slotted ball finds Óscar Santis on the wing. He whips a cross in for outside-back Kevin Maldonado who puts the header just across the face of the goal and wide of the left post.

The attacking wouldn’t stop there with Comunicaciones winning a 59-minute corner, swinging in a cross for the far post out of reach of Sean Johnson. After some bouncing around the ball would find the foot of Maldonado for a quick pass in front of goal, missed by Johnson, and slammed home by Manuel Gamboa to tie the game 1-1.

Manuel Gamboa scores the equalizer for @CremasOficial. We’ve got a game! #SCCL | 1-1 pic.twitter.com/ecvk5ruoJn

But the draw wouldn’t last as NYCFC’s Alfredo Morales with the ball in the 65-minute would find Talles Magno for a quick pass to Taty Castellanos at the edge of the box. A flicked-on chip from Taty lands perfectly into the path of Maxi Moralez who manages a one-time volley and regains New York’s advantage, 2-1.

NYCFC would follow the second goal up quickly with another opportunity in the 71-minute as Taty, Moralez, and Rodríguez would find themselves 3-on-2 charging toward the goal. With a slight cut to his right, Taty gets the two defenders to bite and plays an excellent pass to Rodríguez just inside the box. Despite a rush from Moscoso, Rodríguez places the shot just to his right and puts New York ahead 3-1.

The last opportunity which would have proved another crucial away goal came from Comunicaciones with three minutes of added time after the full 90. As a cross is played into the box, a stumbling Rodrigo Saravia just gets a touch to the ball and smashes the post before it’s cleared by Andres Jasson.

Last Word: Away goal could be an issue for NYCFC

While a 3-1 start puts New York City on the right path to advance to the next round of Concacaf’s Champions League, the away goal from Comunicaciones could be vital in lifting them as the Bronx Blues head to Guatemala for the second leg.

This team has struggled in MLS early on in the season but the offense keeps rolling in the Champions League. NYCFC will need to continue that if they want to find more success in this competition and advance to the next round.

The second leg is scheduled for Tuesday, March 15 at 9 p.m. ET and will be played at the Estadio Mateo Flores in Guatemala City, Guatemala.