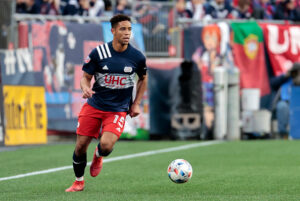 Boston, Mass – Having of course topped the Eastern Conference, breaking the record points tally in the process, the New England Revolution got a bye through the first round of the playoffs. This is an advantage in some ways but equally, their opponents will come into this one with more match sharpness. The Supporters’ Shield winning Revs welcome NYCFC to Gillette Stadium for the conference semi-final… who will prevail?

The playoffs so far

The beauty of the post-season is the unknown. Throughout the regular campaign, New England was far and away the best side that MLS had to offer. That goes out of the window now though. Five of the six first-round games went the way of the home side including NYCFC and Nashville SC. However, Real Salt Lake was the true surprise package. They didn’t have a single shot on target at Lumen Field yet they overcame the imperious Sounders on penalties.

This is the Save of the Year in our eyes. pic.twitter.com/pTnVRqZSDh

At the time of writing, the only conference semi-final to have taken place is Colorado-Portland. The Rapids were the pacesetters in the West and so advanced with a bye, something which proved to be their undoing. After a rather uneventful fixture, Larrys Mabiala came up with yet another late strike to see the Timbers through. A red card for Dairon Asprilla and a tearful injury for DP Sebastian Blanco leaves Gio Saverese’s side in a precarious position going forward.

Focusing on the game at hand and as previously mentioned, it is NYCFC who will travel to Boston. The New Yorkers faced a resurgent Atlanta United at Yankee Stadium and two quickfire goals proved to be the difference. MLS Golden Boot winner Taty Castellanos looped in the opener just after the break before defender Alex Callens made it two just a few minutes later. Some would say that NYCFC has a major advantage on home soil due to the turf being shared with the Yankees and so it will be fascinating to see how they fare on the road.

Tale of the tape

It goes without saying that the Revolution was a sight to behold this season. Arena’s men succeeded against most opponents but it was actually NYCFC who was one of the few to beat them. There was a five-goal thriller in the Big Apple in which New England prevailed back in June. Two months later the man himself Taty Castellanos struck a brace to win it for his side before the Revs won the third and final meeting. Goals from Emmanuel Boateng and Tajon Buchanan orchestrated a comeback in that one after Santiago Rodriguez gave NYCFC an early lead.

Prior to this year, the Revs had never won the Supporters’ Shield. That has now changed but the same goes for MLS Cup. What do the years 2002, 2005, 2006, 2007 and 2014 have in common? New England got to the final hurdle in the post-season but came up short. There has always been a hunger for success surrounding the club but for whatever reason, it never quite came to fruition. In Bruce Arena they have a manager with the necessary winning know-how. He has several major titles under his belt and so he knows better than anyone how to navigate through all of the turbulence.

As we approach Sunday, 10/22 eastern conference teams have been 1 and done. The failure of the Rapids meant that Western Conference teams are 9/23 being eliminated after 1 game or series.

Luckily for Revs fans, Bruce Arena has made MLS Cup from 1 seed a total of 4 times. #MLS https://t.co/d4IAet0izL

NYCFC themselves have never gone all the way whether it be in the race for the Shield or in the playoffs either. This is more understandable given that they only entered the league in 2015. Over the years, from Andrea Pirlo to Frank Lampard, NYCFC have been represented by big names and whilst this squad doesn’t boast a name of that calibre, they are just as good and equally competitive on the field. Four years in a row, NYCFC went out at this stage in the post-season whereas last time out, they lost in the first round. As a club, they are yet to properly show up in the playoffs!

Team new: NYCFC stands in the way for the New England Revolution

Adam Buksa is the primary injury concern for the Revs. The likes of Carles Gil, Buchanan and co have all spent time on the sidelines and it is now the Polish forward who is struggling. The club has said that they’re hopeful he will be available and he truly is an integral cog. Brandon Bye is a youngster who has had a superb season and he has just recently signed a new contract which is great to see. Gil being named Comeback Player of the Year and Turner Goalkeeper of the Year for MLS deserves a huge mention too!

is here to stay

In terms of NYCFC and the league’s top scorer, Castellanos is in a rich vein of form in front of the goal for Ronny Deila. One thing they can’t be denied is attacking opportunities given the presence of so many assets; Moralez, Medina and Tajouri-Shradi being just a few. At the other end, James Sands has had injury issues in recent months but the USMNT defender-come-midfielder will be keen to get one over on his international teammate Matt Turner.

Click here to read what Brad Friedel had to say about the Revs going into the playoffs, amongst other things…

The post NYCFC stands in between the Revs and the Conference final! appeared first on Last Word On Soccer.