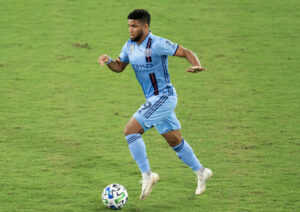 Harrison, New Jersey — New York City FC are currently spending most of the 2021 regular season at Red Bull Arena. The team’s new home hasn’t been too kind to them, though. NYCFC have only won once at Red Bull Arena this year, featuring in draws or losses at other home matches.

However, the script was flipped against Atlanta United on Wednesday night.

Atlanta — who are without the services of Josef Martinez, who is at the Copa America currently — had an entirely youthful starting lineup on the pitch. In fact, Brad Guzan was the only player that started for Atlanta that was over the age of 26, according to the broadcast.

New York City FC took advantage of that youth, and also showed off some of their own. Ismael Tajouri-Shradi, the 27-year-old from Switzerland, scored the match’s lone goal in the 69th minute. Slipping through the defense on a perfectly-timed run to keep him onside, Shradi picked up the ball and slotted it past Guzan.

While plans are still being finalized and, well, planned, for the new NYCFC stadium, the fans in attendance at Red Bull Arena did what they could to make it a home atmosphere.

Referee Ismail Elfath had a busy night, with each team recording a whopping 19 fouls. An early yellow card was shown to Santiago Sosa in the 11th minute. There were three yellow cards in total, all going to Atlanta United players. Ezequiel Barco and Erik López picked up the other yellow cards.

Guzan had a busy night in goal, making six saves. Meanwhile, on the other end, Sean Johnson made three saves to keep a clean sheet at Red Bull Arena.

@tatycaste11anos sets up Ismael Tajouri-Shradi to break the stalemate for #NYCFC pic.twitter.com/4MeDpmtkPV

What’s next for Atlanta United and NYCFC?

It’s quick turnarounds for all teams in MLS this weekend, including these two. NYCFC will remain at Red Bull Arena and take on D.C. United on Sunday at 6 p.m. EST. Meanwhile, Atlanta United will host the other city’s team, the New York Red Bulls — who lost to the New England Revolution tonight — at 3:30 p.m. EST on Sunday.