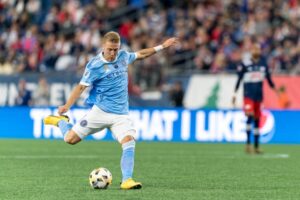 In NYCFC’s Sunday Eastern Conference matchup with second-place Nashville SC, right-back Anton Tinnerholm was taken off in the 33-minute with what immediately seemed a serious non-contact injury which upon further review appeared to be a torn Achilles Tendon.

This afternoon, the club has announced that what many fans feared was in fact true, the 2017 Swedish Allsvenskan Defender of the Year has torn his ACL and will undergo surgery tomorrow in order to repair the tendon and begin his recovery process.

While no timetable has been announced for Tinnerholm’s injury, he will undoubtedly miss the remainder of the 2021 MLS campaign with a return to the field hopefully come 2022 for the 30-year-old defender.

Consistency has been key from Tinnerholm

NYCFC have struggled on the defensive side more recently, dropping points in the last month and a half to several lackluster sides including FC Dallas, Chicago Fire, and local rivals New York Red Bulls in two separate matchups.

While the Bronx Blues backline has fluctuated throughout the season among injuries, suspensions, and international call-ups, Tinnerholm holding down the right-back spot has been a constant for manager Ronny Deila’s squad.

So much so that backup right-back Tayvon Gray; a 2019 homegrown signing for the club and member of the United States 2019 U-17 World Cup roster — has effectively been kept off the field by Tinnerholm, earning just his fifth appearance this season when the Swede went down.

Who will step up for NYCFC: Gray or Gloster

The few occasions when Tinnerholm has appeared on the bench for NYCFC whether it be for a rest day or another reason, both Chris Gloster and Gray have stepped up and filled in at right-back in spite of Gloster naturally playing on the left and Gray more centrally in defense.

Gloster and Gray are both interesting prospects with past US youth national team experience but neither has found a lot of minutes with NYCFC, either in the starting eleven or even coming off the bench.

Gloster’s latest appearance came in September, a 2-1 win over FC Cincinnati where he featured in the right-back spot but was subbed off at the half as he didn’t quite look comfortable playing opposite from his natural side. Contrary to Gloster, Gray has looked solid in his limited right-back showings which include a 1-0 win over Atlanta United in June and more recently helping see out the 0-0 draw against Nashville at the weekend.

And it seems Deila was not only satisfied with Gray’s defensive play versus a strong Nashville side but is also excited about the idea of playing the Bronx native as NYCFC’s manager looks to get more experience for a 19-year-old Gray heading towards MLS Cup Playoffs.

“I’m not a doctor, but it’s not very good…”
looks like Achilles

“I think he did well… Tayvon did a good job today, we can get more experience for him. He’s looked good every chance he’s had”

NYCFC lose Anton Tinnerholm to such a devastating injury as one of their more stable defensive pieces and fans will have to remain hopeful that September’s defensive issues don’t carry into October, but Gray has long awaited his chance to find consistent minutes for City and looks in line to finally earn that opportunity.

Delia and his squad will need Gray to step up if they want to maintain position in what is a very tightly contested Eastern Conference playoff picture with just three points separating eighth from third place heading into the final six games of the regular season.