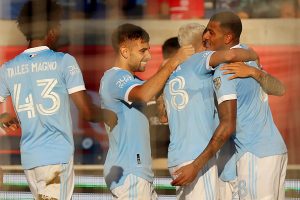 CHICAGO, IL – With goals from Gabriel Pereira and Santiago Rodríguez, NYCFC ends a three-game skid in a 2-0 victory against Chicago to keep the Pigeons’ third place in the Eastern Conference while Chicago drops back down to thirteenth at SeatGeek Stadium.

Despite lacking possession in the opening minutes, it would be NYCFC finding the match’s first opportunity. This was from a chipped pass from Malte Amundsen working its way to Santiago Rodríguez outside the left edge of Chicago’s box. As the clock struck the 16-minute, Rodríguez would play a pass across to Gabriel Pereira jogging towards the area and with no Chicago defender inside 10-yards.

Given all the space afforded to him, Pereira would fire a shot from a distance that beautifully flew into the top right corner. The shot was way out of Gabriel Slonina’s reach to grab NYCFC an early 1-0 lead.

The Pigeons would follow this in the 30-minute with some great passing as Maxime Chanot slotted a ball between two Chicago defenders. Chanot picked out Talles Magno, who would make a pinpoint turn to find open space. Taking just one dribble, Magno would slide a ball to a running Thiago Andrade now in on goal after a touch around Carlos Terán but the eventual shot would be saved with a low dive from Slonina.

The first half would round out with one more opportunity for NYCFC as Anton Tinnerholm knocked down the ball with a header and played a give-and-go with Pereira who’d put a quick move on a sliding Federico Navarro to find open space. Again given what was afforded to him, Pereira would fire a shot from just outside the box but this time would have it saved by Slonina on a reflexive dive to keep the scoreline 1-0 at the half.

NYCFC make it 2-0 with a controversial goal

NYCFC would open the second half with Magno losing the ball in the 46-minute and Chicago playing it backward to Rafael Czichos in front of goal. As he turned away from a pressing Rodríguez, Czichos moved right into the path of Pereira and was dispossessed with Rodríguez scoring an easy one-on-one with Slonina. However, as was evident upon further review there was a foul from Pereira on the play but the match official would opt to let the goal stand and not take an additional look at the goal giving NYCFC a 2-0 lead.

With a few back-and-forth opportunities from both sides but none finding their way on goal, it would be Chicago developing the game’s last chance as they won a corner in the 90-minute with five minutes of added time. As Miguel Navarro lined up to take it, he’d pick out Chicago substitute Jhon Durán central to the box and leaping to meet the cross with no NYCFC defenders in sight.

Managing a very powerful header, Durán would leave Sean Johnson frozen but would smash the ball off the crossbar before an offside call was made to preserve a clean sheet for the Pigeons.

NYCFC we’re able to put a stop to some bad form with an all-around solid win on the road in Chicago after hitting a few bumps in the road with the losses of Ronny Deila and Taty Castellanos. The bigger question now will be if NYCFC can continue their success coming up against a much more challenging and currently playoff-bound side in Orlando City on the road again next weekend.

While on the other side, Chicago has now lost back-to-back matches after a pretty strong run of five games with four wins and a draw which sees them far off from playoff contention. They’re going to have to get back to winning ways again behind Xherdan Shaqiri to have any chance at fighting for a playoff spot but they’ll have to do it against a very good CF Montréal side on Saturday.

The post NYCFC ends a three-game skid with a 2-0 win over Chicago Fire appeared first on Last Word On Soccer.