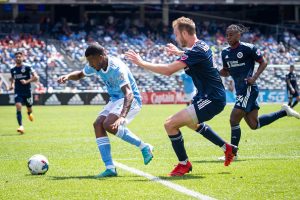 PREVIEW – Two of the top teams in the Eastern Conference from just a season ago, NYCFC and New England, will meet Sunday night as the Revs look to battle for playoff position and the Pigeons look to retain it. As of late, it has been a struggle on both sides with New England managing just two wins from the club’s last twelve matchups and NYCFC still searching for their way following the departure of Ronny Deila and Taty Castellanos having won just a single match of their last seven.

This battle at Gillette Stadium will offer either of these sides a chance to finally get their MLS season back on track with a full three points that could ultimately prove invaluable in this year’s push for the playoffs.

A must-win for both clubs?

New England Revolution reporter Jamie Rooke said it best last week… “Every Point Matters” and with just six regular-season games left on the schedule for both NYCFC and New England including this matchup the playoffs are just around the corner.

Particularly for New England who sits in ninth place in the conference and currently remains outside playoff position, three points against New York City could prove all the difference in securing a postseason spot.

While NYCFC currently finds themselves in a much better position at fourth place in the conference, they need the three points to stop from stumbling down the table and falling out of playoff position which seems unlikely at this point in the season but certainly isn’t impossible.

A win would most likely see NYCFC lock in their playoff spot but after two consecutive losses to Orlando and D.C. they desperately need to improve or they’ll forfeit any chance at repeating as MLS Cup Champs.

A frustrating evening comes to a close. pic.twitter.com/vpQrsEojDB

NYCFC needs to adjust without Castellanos

Back at Yankee Stadium on July 9, it would be NYCFC emerging over New England with a 4-2 victory on the back of two goals from Castellanos, and one from both Talles Magno and Gabriel Pereira. However, NYCFC will be without their star striker once again and have had a very difficult time adjusting their offensive system without him leaving the door open for New England.

Behind Carles Gil, Gustavo Bou, and some attacking reinforcements from this summer’s transfer window, the Revolution has the offensive capability to overpower NYCFC if head coach Nick Cushing can’t figure out how to adjust.

It’s tough to pin it on just one person but the offensive output as a whole has lacked with Castellanos’ departure and it’s evident that changes need to be made to get NYCFC back to dominating offensively or at least producing something.

With Adam Buksa just recently leaving New England for Lens, most expected a step up from some of the club’s major playmakers over the past few games but outside a lone goal from Gil in a 2-1 loss to the LA Galaxy, it has been a slow buildup for others like Bou who just finally returned from injury.

It might seem obvious but New England is going to have to find ways to actively get their playmakers involved and contribute over the next few matches to have any kind of a chance at a playoff push and it’s got to start against NYCFC.

On home turf against a team that’s struggled massively in recent weeks, this could be the perfect opportunity for New England to leapfrog into playoff position despite a few tough results and it starts with 2021 MLS MVP Carles Gil and Gustavo Bou leading the way.

With potentially some major playoff implications on the line, the kickoff of this Eastern Conference clash is set for 8 p.m. EST from Foxborough, MA.

The post NYCFC and New England both look to return to winning ways appeared first on Last Word On Soccer.