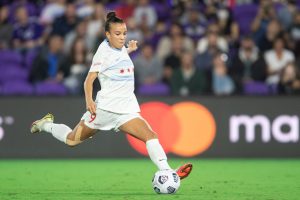 The past two weeks have been some of the most eventful in NWSL history. After the conclusion of the regular season play came the release of the Sally Yates report. The former Attorney General’s findings showed the darkest side of the sport and lead to the firing and resignations of many coaches and executives. Many continue to rightfully focus on the safety of players and finding ways to change the systemic issues surrounding the league.

As for the action on the field, the playoffs begin this Sunday. While there will be many emotions felt, fans and players alike will try to remember why we love this game. The first round will consist of two matches featuring those teams that occupy the third through sixth seeds. The winners of each match will face either the Portland Thorns or OL Reign who have a bye. Here is an NWSL opening-round preview and predictions for the first-round matches.

NWSL Opening Round Preview: The Playoffs Starts on Sunday

Both teams split their season series with one win each. Interestingly both results went to the road team. In just 12 starts, Houston’s Ebony Salmon managed to tally nine goals on the season. Meanwhile, the strong Kansas City attack is led by Cece Kizer and Lo’eau LaBonta who both scored 7. Though Kansas City has won just one of their last four matches, I see them as a surprise favorite talent-wise. With their fierce attacking play as mentioned coupled with a defense led by goalkeeper Adrianna Franch, I’m predicting a 2-1 victory on the road in Houston.

The Wave won both their matches against Chicago this season. San Diego has a massive offensive advantage in Golden Boot winner Alex Morgan. Her 15 goals lead the league this season. Chicago also has a big-name scorer in Mallory Pugh who managed 11 goals for the Red Stars. In just their first year, however, San Diego has put together one of the most talented expansion squads in NWSL history. Had they been facing the then-red-hot North Carolina Courage team in the first round I may have anticipated a closer match. But I can only envision a 2-0 Wave shutout at home this Sunday.

The NWSL Playoffs and What Is at Stake

These playoffs will carry a lot of meaning as it is a single-game knockout format. The winner of the Houston and Kansas City game will face the OL Reign while the winner of the San Diego and Chicago game will go up against the Portland Thorns FC. The Reign and the Thorns got first-round playoff byes as they were the top two seeds from the 2022 NWSL season.

The post NWSL Opening Round Preview: The Playoffs Begin on Sunday appeared first on Last Word On Soccer.