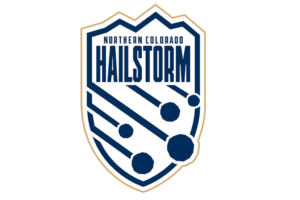 The club’s colors will be navy, white, and tan, representing the “naturally occurring beauty, along with the noble fortitude of the community and the breathtaking tones of the mountainous terrain.”

The club’s crest features a white background with blue, and a tan outline. There are five hail stones of varying size with lines tracking their path. The hailstone linework somewhat mimics the shape of the original Telstar, the official ball of the 1970 World Cup. Navy and tan linework at the top of the crest show an outline of two distinct mountain peaks.

“It was a four-month process that I’ll never forget,” said Payne. “I am extremely proud of the brand that we
have created. The crest is bold and striking and has so many references to the local area. I loved collaborating with this ownership group.”

The crest is a bit simple for this reporter. It’s mostly white. Northern Colorado Hailstorm FC is a mouthful, but so is Rio Grande Valley FC Toros. As long as the local and national soccer community gets to know what someone’s talking about when they name drop Hailstorm, it will be alright. Initially announcing the club’s name with just the region then adding a thing or animal has become typical for the USL.

Nitpicking aside, it’s on theme for the region. Colorado already has teams named after the prominent local animals and natural features. Hail is a plausible threat most of the year in Colorado, especially in the northern part of the Front Range.

The club could have gone with moose, mountains, or something winter sports related. But when I think of what’s unique to Northeastern Colorado relative to the rest of the state, it’s the weather (specifically hail) and the Oil & Gas industry.

“We are thrilled to be able to bring a culture of competitiveness, togetherness, and success with a brand that echoes the beauty and strength of the power of Mother Nature,” said Hailstorm FC Owner and Future Legends CEO Jeff Katofsky.

A well executed high press could be described as a hailstorm. So could an up tempo attack that peppers the opposing goalkeeper with shots. The team name could easily be used in wordplay for what’s happening on the field and in joking reference to this state’s insane weather patterns. A team name that’s ripe for memes is a good name in my book. Dare I say that I am looking forward to the first weather delay of a Northern Colorado home match.

Despite being transplants, the Katofsky family has shown an understanding of the local community and culture. The symbolism behind this crest show that.

They’ve picked a decent location for the stadium (it’s not Fort Collins, but I digress). They have a very ambitious plan for the Future Legends Complex. If they achieve what they’ve set out to do infrastructure wise, soccer in Colorado will be better for it, professionally and at the grass roots level.

If their ambition and follow through continue on the field, nor rain, nor hailstorm, nor Fullmingo will stop them.