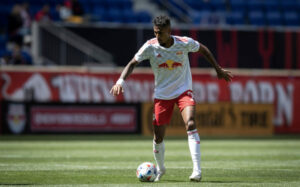 Orlando, Fla. — Cristian Casseres Jr. put the New York Red Bulls on the board with a spectacular left-footed curler. Orlando had the chance to equalize from the spot but Carlos Coronel denied Mauricio Pereyra with a fine save. Orlando equalized through Mueller with his second goal of the season in the first half. Fabio restored Red Bulls’ lead with a near post strike. The Red Bulls earned their first road win of the season.

New York makes a few changes to the side that drew at Atlanta United. Cristian Casseres Jr. is immediately back in the fold in midfield after Copa America duty. Andres Reyes is unable to go after pulling his hamstring against the Five Stripes, so Tom Edwards partners Sean Nealis as the center back pairing. And the fun striker partnership of Fabio and Patryk Klimala leads the line, the Brazilian gets the nod over Tom Barlow.

For Orlando, only one change: Chris Mueller, who scored against Inter Miami last time out starts over Silvester van der Water.

First Half: A golaso, yellow cards and a penalty save

It didn’t take long for the action to kick, within the opening two minutes Urso got a yellow card for a challenge on Carmona. And in the sixth minute, the returning Casseres struck a beautiful left-footed curler outside the box past Austin for the opener. It’s the fourth goal of the season for the Venezuelan, tied for the team lead with Caden Clark.

Nani looked to have equalized from an in-swinging free kick but referee Joseph Dickerson blew the whistle for a foul from the home team. Quickly after, Carlos was visibly hurt and shaken, and substituted for Rodrigo Schlegel.

After an onslaught of Orlando attacks, the Lions got a penalty just before halftime. Pereyra stepped up and Coronel saved, one of his best moments of his Red Bull career. The first half whistle blew and there were big moments for both teams. The golaso from Casseres, many missed chances from Orlando, a penalty save to boot. Not to mention four yellow cards, two for each team to punctuate an enthralling opening half.

Three shots on target for Orlando, two for New York. The Lions utilized the left flank to nice effect and sent multiple crosses from both sides of the pitch for Dike to head onto. Mueller was also a decent threat from outside the box, but many will wonder why Nani didn’t step up for the penalty.

Carlos Coronel comes up with the HUGE stop! pic.twitter.com/JP8hUph0Wv

Second Half: Orlando seals the deal

The pace and energy was cranked high to start the second half with Yearwood shooting from close range only to put it wide. Dike also shot from inside the box but was stopped cold by a sprawling Coronel. Frankie Amaya came on in place of Carmona, the youngster having another fine performance showing a nice work rate.

Yearwood went into the referees book for a yellow card after tripping up Urso. Orlando equalized through Mueller. Dike pressed Nealis who tried to carry the ball out of his own box, then passed it around for the American to finish. He makes it two goals in as many matches. Double substitution for Orlando in the 70-minute: Oriol Rosell on for Urso and Benji Michel for Pereyra.

Seven minutes of added time announced. Tom Barlow came on in place of goalscorer Fabio, then got a yellow card for time wasting kicking the ball away. And after 98 minutes of play, the full time whistle blew. New York escaped Orlando with a 2-1 win.

Make no mistake about it, it’s the best result of the Red Bulls season. To go into Orlando, one of the best in the East and a top-five team in all of MLS and hand them their first home loss is brilliant. Fantastic performances from many, including Tolkin, Davis, Casseres and others is what was required. It’s a landmark moment for Gerhard Struber to push all the right buttons and get the most of this young, dynamic group of players. While Klimala didn’t have his best game, he surely made his presence felt and will find himself on the scoresheet as he finds himself in dangerous attacking positions.

Fabio has proved to be one of the best signings of the season and took his goal very well. Coronel had a moment of truth and came up big with his penalty save. Tolkin has basically made the left back spot his own with another terrific performance. And there can be no doubt of just how good Casseres is. He is pound for pound the best all-around midfielder in the league.

Much will be made as to why Nani didn’t step up to take the penalty. But nonetheless, the Portuguese man was nullified by the Red Bulls in a superb display of grit and determination to limit his effectiveness. Orlando are still one of the best teams in the league, but the plaudits go to the team in Harrison. In the three games on the road: one win, one draw, one loss. But it’s okay, this side is growing by the week and have shown they can compete with anyone. They sweep the season series against the Lions and are full of confidence going home this coming week.