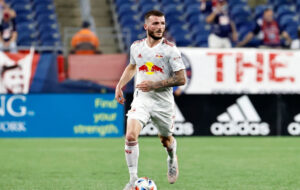 They’ll be tested once more against one of the East’s strongest in Orlando. The Floridian outfit are one of three unbeaten teams to begin the season.

Star winger Nani will be out against the Red Bulls, but Oscar Pareja’s team is crafty in attack. Tied for fourth in the Supporters’ Shield standings, the Lions can continue their riding a high since last seasons’ debut in the playoffs. However, New York will hope to continue their home cooking, where both victories came from. In what’ll be the 15th regular season meeting, New York owns a 6-5-2 edge over Orlando, while having a 4-2-1 advantage at Red Bull Arena.

On paper, it’s a very intriguing matchup to watch. And with every match there are a number of things to look out for, so let’s dive deep into watch to watch for.

Starting Tom Edwards or Kyle Duncan, but not both

When Andrew Gutman came to the club, he started immediately at left-back and impressed. Shining against Sporting KC and scoring against LA Galaxy, the team had an outlet to build attacks down the left flank. However, with his absence in the last two games, the team has suffered greatly with presence sorely being missed.

Kyle Duncan started opposite Gutman at right-back. But since Gutman’s knock, Duncan has filled his role at left-back while loan signing Tom Edwards plays on the right. Against New England, Gustavo Bou and Tajon Buchanan ran roughshod exposing Duncan’s inefficiencies on the left. Caught out of position and dribbled past, Duncan had a game to forget. It was also telling the slow progression in build-up play going through Duncan on the left, leading to wasted chances or possession lost.

It didn’t get much better with Duncan at right-back, but his crossing ability is something to make more use of. The Englishman shows a quick burst and does press well so he’ll likely start this match. But the biggest issue is at left-back, where Gutman hopes to pass fit to start. It is puzzling to see John Tolkin ride the bench despite being the more natural fit over Duncan and even Amro Tarek who played left-back against Philadelphia.

Tarek will likely partner Sean Nealis at center-back as that department hopes to patch up quickly. The defense will be tested against the likes of Tesho Akindele, Chris Mueller and Mauricio Pereyra. Carlos Coronel has been made to work, making 20 saves so far, ranking him top 10 in the league.

One thing this writer and many of you may love is a fun battle in the center of the pitch. It’s arguably the most common area where most matches are won and lost. And both squads have versatile midfields that are crucial in giving their respective clubs the best chance of victory.

Let’s start with the away side. Orlando under Pareja come out in a 4-2-3-1, the defensive-2 is what keeps things ticking and clicking for both defense and attack. Jhegson Mendez had made a name for himself, growing his reputation as one of the best at his position at the 6 in midfield. Recording five tackles and three interceptions in the 1-0 win against Toronto FC, the Ecuadorian was all over the pitch. However, Mendez’s defensive prowess is being upstaged by Kyle Smith, the right-back. Smith is tied for second in MLS with 16 tackles won. Yes indeed, more impressive considering the 29-year-old American is leading the league in tackles averaged at 4.5 via SofaScore. Mendez is averaging nearly three interceptions per match.

And in the Red Bull corner, their majority of tackles are mostly dominated by another Ecuadorian. Cristian Casseres Jr., is averaging four tackles per game and has started every league game thus far. The 21-year-old leads the league in tackles won with 17. He is arguably the most indispensable part of the team aside from captain Sean Davis. Casseres may not feel alone in his defensive duties, as Davis and Dru Yearwood assist in taking the ball away and starting counter attacks. As a team, the Red Bulls rank fourth in the league in total interceptions with 94 and given their style of play expect them to stay top-5 in that distinction.

With tacking machines going head-to-head, expect hard-fought battles for possession. And also expect a few yellow cards in each direction, both teams won’t give an inch.

While Orlando’s unbeaten start is spectacular, it’s their defensive aptitude that catches the eye. Just two goals conceded so far, fewest in the league, with only one coming from open play. Goalkeeper Pedro Gallese leads MLS with four clean sheets, as the Lions sport a 0.33 Goals Against Average.

It’s a stern test for a Red Bulls attack whose strikers haven’t scored a goal yet. Fabio has come closest and even has four assists to his name. Danny Royer has wasted a decent amount of chances and may have played himself out of a starting spot for now. Brian White and Tom Barlow have been in and out to start the season, showing inconsistency. Patryk Klimala could be the first to score as he’s been lively since making his debut against Philadelphia, he has to start against Orlando.

The Red Bulls’ leading scorer is Caden Clark with three goals, Nani has the same amount for Orlando City but will miss the match. New York has yet to utilize the near 6-foot-4-inch frame of Fabio, that’s something that desperately needs to come into play to add another dimension for Orlando to combat. It’s another litmus test to cap off a tough month of May for the Red Bulls. Orlando City will come with belief to get a result.

The post New York Red Bulls vs. Orlando City: What to Watch For appeared first on Last Word On Soccer.