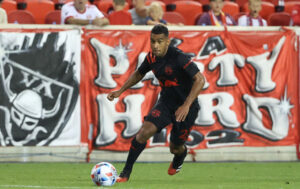 We are in one of the defining points of the Major League Soccer season. At the midway point, near the All-Star Game where all teams have played enough games to be fairly assessed. In a battle between slumping teams, the New York Red Bulls take the trip up north against CF Montreal.

In an ultra-competitive Eastern Conference, every point is valuable. So let’s take a look at a key matchup Saturday night.

Let’s start with the home team. Montreal are one the pleasant surprises of the league thus far. First-year manager Wilfried Nancy, a former academy coach, has taken on the challenge of turning around a team that went through major changes on and off the pitch. The rebrand of the club, the transfers and Thierry Henry stepping down brought uncertainty. However, they kicked off the campaign unbeaten in their opening three games, winning the opener against Toronto FC.

Now, they’ve been trending downward on a current five-game winless streak, the latest being a 2-1 loss at DC United. New Jersey native Mason Toye has seven goals thus far, but the attack flows through young American Djordje Mihailovic. The midfielder has three goals and five assists, making his eight goal contributions the most in the squad.

The Canadian outfit sits in eighth place, one point behind Columbus Crew for the final playoff spot. As for the Red Bulls, they are on a current six-game winless streak, losing at Chicago their last time out. New York sits one place below Montreal in ninth, but are four points in back of them and five behind Columbus.

The aforementioned fierce Eastern Conference is tight, where six points separate second-placed Orlando City and Columbus in seventh. The goals are drying up, they’ve been shutout in two of the six games, and scored just once in four of those six. New York has also won just once on the road all season, while Montreal hasn’t lost since playing the games back home at Stade Saputo.

It’s also something this edition of the squad will have to rectify in order to get back on track. Tom Edwards spoke on how the team needs to get back to winning ways.

“We’ve had a talk as a team on our own. We feel like even though we have a young team, everyone keeps saying how young we are, I feel that we have a lot of experience in the team, even the young lads, they are great lads,” Edwards said. “They have a lot of experience themselves and I feel like it is just coming together as a team, what we are doing in the games, where we were getting results.

What to expect in New York Red Bulls vs CF Montreal

Given how each team plays, there will be plenty of spaces for both outfits to operate. That can make the game one to watch as a neutral, given how both defenses have leaked goals of late. Something’s going to give in a game between struggling teams, it’s up to the managers to find it.

The high-press and long-ball approach by the Red Bulls has been easily nullified hence the recent results. Whether they play balls more to the feet of the attackers and midfielders remains to be seen but could be a welcome change. The trio of Danny Royer, Andres Reyes and Sean Nealis are all close to full fitness and may see some minutes in this game. With Toye and Mihailovic, the pair boosts Montreal’s chances of causing another horror trip for the visitors, it’s a huge game. It’s a game between to teams likely to battle for the last playoff spot in the East.