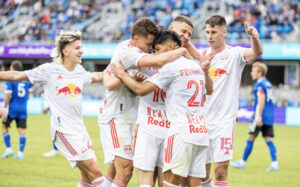 Aaron Long returns to the New York Red Bulls lineup — he joins the Nealis brothers Sean and Dylan — in defense with John Tolkin at left back. Frankie Amaya, Dru Yearwood and Cristian Casseres Jr. will provide the trademark press from midfield. Lewis Morgan makes his club debut at the wing with Omir Fernandez occupying the other flank. Patryk Klimala spearheads the attack, Carlos Coronel is between the sticks. Caden Clark is on the bench.

First corner of the game goes to San Jose four minutes in but nothing doing. The early pressure amounted to very little from the home side.

New York nearly took the lead off a corner kick. The ball would bounce and broke to Nealis, his low effort was stopped cold. San Jose were forced into an early substitution when Nathan pulled up lame after crashing down the touchline. Beacon replaced him.

The Red Bulls quickly regained control of the match with a series of shots and chances. They would take the lead just before halftime. Off a giveaway, numbers came forward. The low cross from Morgan fed Klimala into an easy opening goal inside the six yard box.

Patryk Klimala taps it home and @NewYorkRedBulls take the lead just before the break! pic.twitter.com/OpAkflvXIx

The halftime whistle blew. Twelve shots to five, four big chances to zero in favor of the away side. Aaron Long has looked great in his return since injury. Cade Cowell has been held in check without a shot so far. Red Bulls deservedly in front.

Second Half: Fernandez, Barlow seal the points for New York

New York carried their momentum into the second half with a few shots at goal. Caden Clark came into the match, in for Cristian Casseres Jr.

Tommy Thompson and Benjamin Kikanovic entered the game for Remedi and Cowell respectively. Minutes after the subs, the Earthquakes leveled the score. A free kick from the left flank with pace found the net off a deflection from Lopez.

But it wouldn’t stay level for long, as the Red Bulls retake the lead. Omir Fernandez with his first of the season, he went five-hole through the keeper. Dan Edelman would make his MLS debut, coming on for Yearwood.

One more for @NewYorkRedBulls in second half stoppage time! #MLSisBack pic.twitter.com/HEHtUBaH6k

More subs for New York, youngster Serge Ngoma makes his MLS debut. Tom Barlow also comes on, the pair replace goal scorers Klimala and Fernandez. Tom Barlow would get on the act and make it 3-1 with his goal. It would be all she wrote.

The perfect, winning start for the Red Bulls. Given everything that’s happened this week, this was the best possible start to the season. Goals from attackers to get them on form. Two MLS debuts for homegrown signings, and even a Tom Barlow goal. It was a well deserved victory, one that’ll give the Red Bulls confidence when they visit Toronto FC next week.

It could get worse before it gets better for San Jose. Matias Almeyda’s status as manager was already feeling tenuous, and this result won’t help one bit. They couldn’t take their early chances and failed to match the application of their opponents. Earthquakes host the Columbus Crew next week before visiting Philadelphia and Minnesota. It’ll be tough to see where the wins come from to start the campaign.

Additions could make the Red Bulls more fun, more dangerous. We must remind ourselves that Luquinhas and Tom Edwards didn’t play due to visa issues. Once they come back, they’ll give this team more dimensions and tactical flexibility. It’s mouthwatering to see what the results would look like.