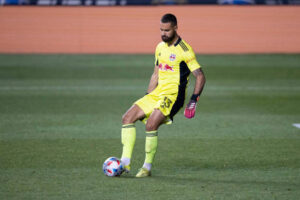 FOXBORO, Mass. – The New York Red Bulls lose their second straight game, this time a 3-1 decision against the New England Revolution. A hectic first half saw the away side score, then go down to 10 men. It was all New England after that, scoring three without reply and taking home all three points.

What a debut! Andrés Reyes heads in his first @MLS goal in his first @Newyorkredbulls start! @Audi | #RBNY pic.twitter.com/PyyH3lgBwU

Royer would miss a golden chance to double Red Bulls advantage. One-on-one against the goalkeeper, the Austrian whiffed in his attempt that was easily parried.

Gustavo Bou would equalize for the Revs in the 36th minute. A clever through ball from Traustason in between the center backs sent Bou clear and calmly slotted his second goal of the season.

Minutes later, Reyes would be sent off (second yellow) for a reckless challenge. He lasted 39 minutes. Things would go from bad to worse when Buchanan gave New England a 2-1 lead scoring from an acute angle. Coronel will not want to look back on that play, failing to cover his near post.

Patryk Klimala and Omir Fernandez replaced Fabio and Amaya respectively. Captain Sean Davis covered as both center back and defensive midfielder, a sign of things to come.

The Revolution dominated the second half generating chances. If it wasn’t for Coronel, the score line would’ve been more egregious. Bruce Arena will need to monitor Gil moving forward. The Spaniard limped and hobbled throughout the latter parts of the second half.

Buksa would put the contest beyond reach as he made it 3-1. Second straight game with a goal as a sub for Polish international. Three unanswered goals for the home side gave them an ultimately comfortable victory. New England wins their second straight, unbeaten in their last three matches. New York loses its second straight contest.

That first half will be among the most eventful of the season. Wasted chances from Royer will call into question whether he should be starting alongside Fabio. Aside from something out of the ordinary, you can expect the likes of Tom Barlow, Brian White or Patryk Klimala to play as second striker. It was a curious decision seeing Fabio, the team leader in assists being subbed off instead of Royer.

Andres Reyes went from great to careless. His goal was well taken, using every inch of his six-foot frame to jump and head home the opening goal. But after that, it all went crashing down. Reyes’ first yellow was courtesy of a rough challenge which looked like a hockey check into the boards. And the second one came via two-footed tackle standing up which gave referee Jair Marrufo no other choice. The positive start was undone in rapid fashion.

The CB crisis continued for New York seeing Davis covering two positions. However, it’s the build-up play that suffered the most, seeing attacks flow on the left where Duncan isn’t a natural LB was awful. The end result became the Revs constantly maneuvering down the right flank of their opponents and scoring. What was also curious was seeing Harper, who was subbed on in the second half, being subbed off for John Tolkin. Why not just start Tolkin? Andrew Gutman didn’t feature as he’s still not fully fit, only making the bench.

Make no mistake, the Revolution are as good as it gets in the Eastern Conference. They’ve won all four home games so far this year, and have only lost once. Arena’s men will occupy first place and it wouldn’t be a surprise seeing them make another deep run come the fall. On the whole, New York were the authors of their own downfall. An unexpectedly brilliant start crashing down from an equally disastrous end to the opening 45 minutes.

Next week sees the Revolution visit FC Cincinnati on Saturday. The Red Bulls come back home for their matchup against Orlando City.