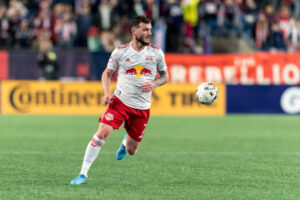 Saturday evening sees the New York Red Bulls hosting CF Montreal. New York will look for their first home win of the season, and are coming off a wild 1-0 win at New England Revolution.

On the other hand, the Canadian outfit won a thriller of their own for their first victory of the year. Both teams are on opposite ends of the Eastern conference table. The two teams also come with questions that will be answered on the pitch. Let’s take a look at this Red Bulls vs. CF Montreal game and how it may shape out.

Red Bulls: looking to win this game without Frankie Amaya

The 1-0 win at the Revolution was both surprising and a relief, it had been over five years since the last win at Gillette Stadium. With 10 points already after five games, being in second place in the East has flown under the radar in the early going. But the win came at a cost as midfielder Frankie Amaya will miss Saturday’s game after being sent off.

Amaya has been one the best players in the team. His absence is significant given his ball-carrying and tackling abilities. So who steps up in his place? Cristian Cásseres Jr. is the safe bet to make his first start of the season, alongside Dru Yearwood. Daniel Edelman can also play that same position but Gerhard Struber will likely roll with the experienced Venezuelan.

Struber also announced that Caden Clark remains out and will miss this game. New signings Luquinhas and Ashley Fletcher will likely play more minutes and may even start the game. Goalkeeper Carlos Coronel will look to build off last weeks’ performance that earned him MLS Team of the Week honors. Per FotMob — the Red Bulls rank first in shots on target, big chances created and successful tackles. Much of that is led by the press and it’ll be no different against a tricky Montreal team.

Best of the best in Week 5

If you’re going to win your first game of the year, win a thriller. That’s what Montreal did, 4-3 at Cincinnati in one of the games of the season. Djordje Mihailovic bagged a brace and is the danger man for Wilfried Nancy. However, the three goals conceded has now led to Montreal giving up 14 goals so far this year after five games. That’s nearly three goals conceded a game, a worrying trend for this club that sits in 13th, only Inter Miami are worse.

For the neutral, Montreal are thoroughly entertaining. Given how they concede, they also score their fair share as well with 9 goals scored. That’s tied for third most in MLS, along with opponents New York this weekend. Much of their poor early start could be due to their CONCACAF Champions League ties, but with that out the way the league will take up more importance.

Grabbing a second consecutive road result will surely boost the confidence of the club. Victor Wanyama will anchor the midfield, while 37-year-old Kei Kamara can make it back to back games with a goal.

These two teams engaged in two wild last-minute games last season. Remember the 2-1 win for Montreal in Canada? That game saw Coronel save a penalty numerous times only to be caught stepping off his line early. Wanyama would bury the winner. Or how about the narrow 1-0 win for the Red Bulls in Harrison? Former on-loan striker Fabio headed in the lone goal that helped push the team to the playoffs. Should we get more of the same, then it’ll be another fun one this weekend.