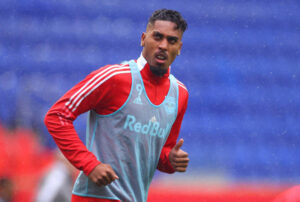 HARRISON, NJ – For the first time in three weeks, MLS was back. And for the first time ever, the New York Red Bulls and Nashville SC faced off. It was interesting to see how both teams would fare as key members from both were away on international duty.

But as the night rolled on, only team was clearly the superior. The first goals of the season from both Fabio and Kyle Duncan see New York Red Bulls win their fourth straight game at home. Furthermore, New York knocked off another team from unbeaten status.

The usual feeling-out process started early. This was always going to be the case seeing as it’s the first game for both teams in nearly three weeks. New York dominated possession throughout as Nashville had all their players behind the ball. It served as a theme as Nashville couldn’t muster much going forward.

New York created chances out wide sending crosses into the box. Klimala would get on the end of those crosses but his headers would fall wide of goal. It seemed apparent that Nashville’s best opportunity to score would be on the counter-attack. Possession stats proved that as the Red Bulls held the ball at 62-percent.

The goal would eventually come, and what a goal it was. Fabio would mark his first tally of the season, on the volley off a sweet flick from Klimala. The Brazilian showed his relief to get off the mark with his emotion in his celebrations, even dapping with Gerhard Struber. New York would carry that momentum into the tunnel as the first 45 concluded.

An early scare for New York came as Sapong put the ball in the net but was waved offside three minutes into the restart. It was only few and far between that Nashville would create opportunities to score. And with their pressing prowess, the Red Bulls took full advantage.

Kyle Duncan got on the scoresheet for the first time as he had plenty of time and space to shoot with his weaker left foot past Willis to double the lead. Credit goes to Caden Clark for switching the play onto the fullback, who took his strike very well. Nashville would huff and puff but ultimately nothing came of it. Fabio was subbed off and was given a standing ovation and a hug from his manager on a job well done.

It was apparent immediately that Edwards, who played at center-back against Orlando, now played at the base of the diamond. That positional and tactical versatility will do good going forward with Cristian Casseres Jr playing for Venezuela. It’ll be interesting to see if that’s the plan going forward.

In many ways, it was the perfect night for the New York Red Bulls. Thanks to the Fabio volley, he finally got on the scoresheet and took a deserved standing ovation. His physicality and ability to link with Klimala will pay off dividends in the future. Nashville simply didn’t have enough to threaten New York, only getting one shot on target. Uncharacteristically, New York held nearly 60-percent possession, but their plan in attack worked to a tee.

And don’t look now, but after a shaky start the Red Bulls are 3rd in the Eastern Conference going into the weekend. The Red Bulls have turned Red Bull Arena back into a fortress and are becoming a team very few want to play against right now.