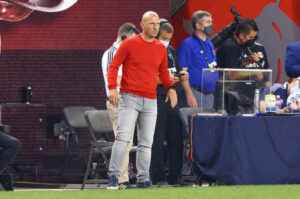 HARRISON – Robert Beric scored after a VAR review to give the Chicago Fire its first road win of the season at the New York Red Bulls. New York created sixteen chances to Chicago’s five, and outshot them 20-9 but couldn’t find an equalizer. Loud boos from a disappointed Red Bull Arena crowd were heard at the full time whistle, the Fire now leapfrogs New York in the Eastern Conference table.

New York makes a few changes to the side that defeated Columbus back on August 18. Amro Tarek is on the bench, Andrew Gutman takes his place in defense. Tom Edwards gets the nod over Kyle Duncan and will play at right wing-back, while Caden Clark occupies the opposite flank. John Tolkin stays in midfield, while Wikelman Carmona is the number 10 behind the strike partnership of Fabio and Patryk Klimala.

Chicago also make a couple of switches to the team that lost at Orlando last Sunday. Jonathan Bornstein has back as captain and steps in place of Francisco Calvo, who is on the bench. Brian Gutierrez also returns in favor of Stanislov Ivanov, the 18-year-old American partners Robert Beric in attack.

Against Columbus, the Red Bulls went to a three-man defense but against Chicago have switched to the classic 4-4-2. Caden Clark and Carmona provided the width, Gutman and Edwards the fullbacks. With this formation, the Red Bulls were able to suffocate the midfield, leaving Chicago to play out wide.

Through the first 30 minutes of the match, Chicago only had one shot that was blocked away for a corner kick. Later on, Chicago took the lead through Robert Beric in the 32nd minute. From a throw in, the ball got passed multiple bodies before it fell to the feet of Beric who slotted the ball home. Red Bull players immediately had their hands up thinking he was offside, but after VAR review, the ball hit a Red Bulls player and referee Victor Rivas ruled otherwise and the goal stood.

New York were frustrated throughout the first half. Despite outshooting the Fire seven-to-four and creating more chances at five-to-one, the Red Bulls weren’t able to get the ball in the net. Many times, passes didn’t connect and the crosses into the box led to half-chances. The one bright spot for Gerhard Struber’s men was the play of Tom Edwards, who’s finally showcasing his sublime crossing as a right-back.

Chicago knew the Red Bulls were going to press hard, but maybe they didn’t expect to be fouled on eight different occasions. First half xG (Expected Goals) according to FotMob – New York 0.38 – 0.76 Chicago.

Second Half: Chicago Fire defeat the Red Bulls, earn its first road win of the season

The Red Bulls had the first decent chance to level the score, but Clark skied his effort from a throw-in. Chicago were picking their moments to capitalize on New York’s mistakes, and Herbers nearly doubled the lead but Coronel came up with a great save down low. Nnamdi Offor came on to replace the teenager Gutierrez as the Fire made their first substitution in the 59th minute.

Kyle Duncan and Daniel Royer came on for Tom Edwards and Patryk Klimala respectively in the 64th minute. The changes immediately spurred on a great chance for New York to level the scores, but Royer couldn’t connect on the cutback by Fabio. It also reverted the Red Bulls to a 4-2-3-1 formation as they looked to generate more goal-scoring threats. Frankie Amaya entered the match in place of Caden Clark. Amro Tarek replaced Andres Reyes who was hobbling after pulling up lame following an aerial duel.

Carlos Teran picked up a yellow card after shoving Amaya to the ground. The ensuing free-kick led to a Royer header that went wide. The Fire then made a double substitution with Alvaro Medran and Elliot Collier replacing Stojanovic and Beric. Medran made an instant impact nearly scoring a second Fire goal but his curler from outside the box hit the outside of the near post.

Loud boos rang after the final whistle, the Chicago Fire win its first road game of the season.

Never in doubt. Berić gets on the board

The Chicago Fire have done it, they’ve won their first road game of the season. A huge victory for Raphael Wicky and his players, who now leapfrog the Red Bulls in the process. Their gameplay worked, they bended but didn’t break and earned three points for it. Even with the help of VAR, Robert Beric and the Fire are making themselves a tricky team to play. Three wins to cap off August, Chicago can feel good about themselves going into the international break. They continue their road voyage to Montreal after the break.

As for the Red Bulls, this was as bad a loss as any this whole season. Especially at home where they are their strongest and have produced their best performances. It’s never good to give a road team their first win, much less when it is this deep into the season. But the Red Bulls biggest problem is producing chances from open play. Many of their chances in this game came from out wide, and were wasteful. Sixteen chances were on offer, and none ended up in the back of the net. Multiple players are in desperate need of a confidence boost and a goal after this. The boos at the end told the story, and now the Red Bulls go back to the drawing board. They face a massive game after the break, with DC United coming to town.