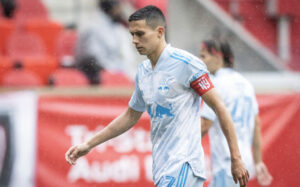 Despite a solid start by the road team, New England grabbed a two-goal lead in the first half against the New York Red Bulls. Carles Gil ran the show in the opening 45 minutes and Gustavo Bou made it a three-nil game in the second half. The Red Bulls climbed back with two goals of their own in the second half. But the comeback fell just short.

First Half: All Revolution

The first opportunity came in the opening six minutes. Tom Edwards slipped on the ball, the Revolution looked to capitalize but Bou’s shot at close range was denied by Coronel.

Amaya tested goalkeeper Matt Turner with an effort from outside the box that led to a corner kick. From the ensuing corner, Nealis had a decent chance to head the ball in the net but Turner caught it safely. Dru Yearwood came close with a curling effort from the left side of the box. However, the shot bounced off the crossbar.

The good start for New York dissipated. New England opened the scoring in the 27-minute through Buchanan. The Canadian found a pocket of space behind the defense with a magical assist by Gil to slot past Coronel. Buchanan also found the net in the last meeting between the teams.

The Revolution double their lead through DeJuan Jones. He continued his run into the box, cut the ball to his right foot and blasted one into the near corner. Gil also doubled his assist tally.

Gil nearly had a third assist, with a one-touch pass for Bunbury but his low strike was stopped by Coronel. Halftime came and it was the Carles Gil show. New York came out strong in the opening 20-minutes but all the momentum was wiped out once New England got on the board.

Second Half: A consolation goal for Red Bulls

Maciel replaced Matt Polster at the restart, as the latter had a yellow card in the first half.

The Revolution made it three-nil after Bou raced past everyone on the counter attack and chipped one over Coronel. Wikelman Carmona replaced Amaya. Gil earned a his hat-trick of assists.

Shortly thereafter, the Red Bulls got on the board. Klimala grabbed his first MLS goal sliding one into the net off a sweet chest pass by Fabio. Credit also goes to Tolkin for the cross-field ball onto the Brazilian. It was also Fabio’s fifth assist of the campaign.

Tom Barlow replaced Yearwood for much needed offense. Then, Arnor Traustason came on for Bunbury.

New York inched closer, with Andres Reyes scoring a scrappy goal in the box. The failed corner kick had the ball bouncing in the box and Reyes smashed his effort into the net for his second goal, both against New England.

Adam Buksa subbed on in place of Bou, who took his chipped goal very well. Jason Pendent also joined the game, in place of Tolkin. Scott Caldwell replaced goalscorer Buchanan late in the match. The comeback fell short and New England held on for all three points.

Where to start? A positive start by the Red Bulls amounted to little when they got down by two goals. Carles Gil is the best attacking playmaker in all of MLS, three assists on the night makes it ten for the season. He’s a leading contender for MLS MVP early on, but this was kind of to be expected. All the Revolution do at home is win, five games at Gillette Stadium, five victories. Speaking of five, the Revs are now on a five-game winning streak and it’s their second straight three-two victory. This team isn’t slowing down. It’s a road trip next to Dallas this weekend.

As for the Red Bulls, the losses of Caden Clark (appendectomy) and Cristian Casseres Jr (Copa America) were huge. The team came with a short bench and only made three of the allotted five substitutions. But the big story will be how poor they were defensively. The backline were caught out on the first goal, the second one falls on Coronel getting beat at his near post. But the third goal was inexcusable. How does an entire backline not adjust their positions to defend the counterattack? This defense was already depleted due to injuries but the goals they conceded were disappointing.

Credit to Gerhard Struber’s side for coming back and making a game out of it. Fabio has five assists on the season which is very impressive and shows how important he is to the team. Klimala gets his first goal of the year because of the Fabio’s chest pass, this pair will be very fun to watch moving forward. But on the whole, this team lost to a better side who are one of the best in the league. They are now under .500 going to Atlanta on Sunday.