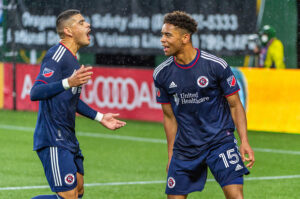 PORTLAND, OR – A number of the fixtures in this opening round are hugely intriguing. New England visiting Portland is one of these games as the MLS Cup runners up from 2021 clashed with the defending Supporters’ Shield champions. There were some new faces on show at Providence Park but at the same time, there were a number of returning names on the team-sheet. It ebbed back and forth- come the final whistle, neither side could snatch all three points.

As was discussed prior to the game, albeit briefly with Bruce Arena dismissing it quickly, Matt Turner missed out on this one for New England. This allowed Earl Edwards Jnr to make his Revolution derby in MLS, whilst Jacob Jackson began this one on the bench. Arena praised Edwards after the game, saying that “I think for Earl, his first game with us, he did very well.”

Elsewhere in the New England side, there were competitive debuts for new signings Sebastian Lletget and Omar Gonzalez. Gonzalez partnered stalwart Andrew Farrell at the back whilst Lletget was of course in midfield- Jozy Altidore entering the game as a sub late on. Going back to Lletget and he netted the second of the Revs’ goal in this 2-2 and Arena spoke highly of him post-match. “It was a good goal. He played pretty well, played hard for about 75 minutes, I think he’s a good addition to our team.”

Moving onto the Timbers team and there were a lot of last season’s players in action. The Chara brothers, Yimmi and Diego both started and the former tied the game up in mind-blowing fashion. Elsewhere, attacking fullbacks Jose Van Rankin and Claudio Bravo were in from the start for Gio Savarese, plus exciting youngster Santiago Moreno went for 83 minutes before Sebastian Blanco entered the fray.

New England and Portland play out a 2-2 draw

Last season, the Revolution got underway with a draw and they suffered the same fate this time around. Edwards was called into action early on for the away side and he spoke on this and what it meant for the team; “to make a save like that, I was definitely getting my feet wet and building confidence off of that. I think that played a big factor going into the rest of the game.”

Goals at Providence Park between New England and Portland

The opening goal of the game came on the brink of half time. Fullback Brandon Bye headed a Carles Gil corner back towards the direction it came from and it beat Portland goalkeeper Aljaz Ivicic, striking the underside of the bar on its way in. Not only is this Bye’s sixth goal in the New England colours but last season’s MVP Gil picks up where he left off on the assist’s front.

On the hour mark, Dairon Asprilla levelled it up for the Timbers. Moreno slid through a neat ball and Asprilla was able to remain composed and fire beyond Edwards. The scoreboard didn’t read 1-1 for long though with new signing Lletget, as previously mentioned, opening his New England account. DeJuan Jones assisted Lletget and the former Galaxy man seemed in high spirits about the occasion: “I’m very happy… I want to build on that, continue creating chances for my teammates and getting accustomed to my team.”

Watching this on repeat!!

The pick of the bunch in this clash between New England and the Timbers was certainly the fourth and final goal. The Chara name has long since been a prevalent one in MLS and Yimmi made it 2-2 with an early goal of the season contender. A deflected cross came through to the 30-year-old Colombian and the rest is history. He acrobatically volleyed a bicycle kick beyond the grasp of a hapless Edwards to send the Portland faithful into raptures. Altidore entered the fray shortly after but the Revs were unable to restore their lead for a third time in the game.

The last word of the game at Providence Park

In the grand scheme of things, a trip to Providence Park is never easy and so New England starting the 2022 season with a point on the road isn’t something to be overlooked. This is just the start and as Bruce said following the final whistle, “we have a lot of difficult games now ahead of us, obviously starting with our first home game of the season next week, so it’s going to be challenging.

FC Dallas will visit New England next weekend after drawing with Toronto in their opener. Meanwhile, the Timbers will meet fellow Western Conference hopefuls LAFC in a mouth-watering clash at the Banc of California Stadium.

The post New England vs Portland at Providence Park ends honours even appeared first on Last Word On Soccer.