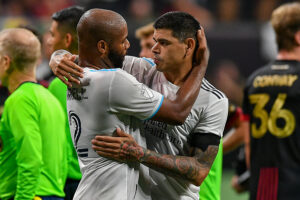 This MLS weekend got underway with New England’s visit to the Benz and both sides were having to do it without key players. There is a category of issues for Atlanta right now and the Gold Cup’s arrival hasn’t done them any further favours, their opponents facing the same scenario being the only silver lining. Even with Matt Turner in the sticks for the USMNT as opposed to the Revs, Bruce Arena’s side mustered up a big shut-out on the road!

Pre-game analysis including the absence of Matt Turner

Both teams were without their starting goalkeepers for this one as, along with New York City FC’s Sean Johnson, Matt Turner and Brad Guzan are in the Gold Cup roster for Gregg Berhalter. This isn’t the only position that has been depleted, defenders Mile Robinson and George Bello joining Guzan in representing the stars and stripes. As well as the US, Canada is taking part in this international tournament and the Revs’ flying fullback Tajon Buchanan has a huge opportunity there given Alphonso Davies’ injury.

New England showed weakness against FC Dallas recently when they had a dynamic forward like Ricardo Pepi driving at them, yet we knew this was unlikely given the stature of the Atlanta frontline. Matt Turner made a couple of big saves in that 2-1 loss but he can’t always be there to bail the Revs out, this Gold Cup stretch thus promising to be a huge test for Arena’s backline. Brad Knighton was again the man to fill Turner’s shoes and after a calamitous outing versus Toronto, he would have been glad to keep a clean sheet.

On the other side, Alex Kann replaced Guzan, Jake Mulraney started after his red card against Nashville was overturned, but Sosa was absent from the midfield due to the accumulation of yellows. Focusing on this or George Campbell making his first start or DP Alan Franco coming back to the line-up would be all well and good but a certain Venezuelan striker and his relationship with Gabriel Heinze is all the chatter. Josef Martinez is the greatest player in Atlanta’s history but he has been training alone for the last couple of weeks, the likelihood of his departure from the Benz increasing by the minute.

Heinze’s men had to go into battle and put Martinez’s situation to the back of their minds, especially given the calibre of their opponents. New England came into this one top in the east whilst ATL were 10th, four points adrift of the playoff line. Despite this though, it is the Five Stripes who have often gotten the better of this fixture with a 2-1 win earlier this season via goals from Brandon Bye and Carles Gil being the first for the Revs against this specific opponent ever.

The early stages of this one were rather cagey and this was understandable, both teams trying to come to grips with the likes of Matt Turner and Miles Robinson being missing. It didn’t take long for the opener to come through with a slip from Adam Buksa in the middle actually working in his favour. The Pole regained his composure and fed Gustavo Bou who, courtesy of a hefty deflection, beating Atlanta United FC goalkeeper Alec Kann for his seventh goal of the campaign.

Shortly after, Machop Chol reacted quickly and slid home a swift response off the back of debutant Amar Sejdic’s effort from range, the celebrations being short-lived as the linesman’s flag was eventually raised. The left side was an issue for Atlanta with the Revs regularly exploiting their advantage there; Lennon versus DeJuan Jones was set to be the big battle but instead, it was Bye versus Mulraney that caught the eye.

At the break, it was clear to see that the three Designated Players were making the difference for New England. The absence of Matt Turner wasn’t that much of an issue given Gil’s reading of the game and quick feet along with the movement of Bou. Gil saw a curling effort denied by the post, a sight that would have been welcomed by a scrambling Kann but besides that, the Bou goal was the difference at half-time.

Martinez’s eyes must have been burning into the back of Heinze’s head as he had to watch the likes of Erick Torres and Jackson Conway take the field. There really was no attacking potency from Atlanta with Chol’s movement probably being one of the very few positives that the Argentinian could take away from this one. Injuries are clearly an issue and international football furthers this dilemma but as it stands, Atlanta needs a verdict and fast.

Marcelino Moreno looked dangerous at times and with three goals, he is ATL’s top scorer in the league, this lack of potency allowing the Revs to get over the line with Bou’s early strike being the difference. New England continues to dominate the east although second-placed Orlando has played fewer games, they get the job done even without Matt Turner and Tajon Buchanan – this being the first time they’ve left the Benz with three points. Adding to that, the Revs have now done the double over Atlanta, ending their three-game streak without a win whilst breaking ATL’s unbeaten record on home soil. New England goes marching on!