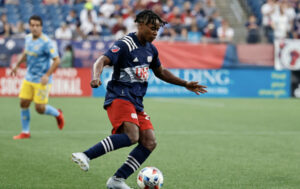 PREVIEW- New England hosted Toronto at Gillette Stadium at the start of the July and were in for quite the surprise. It was the Canadian’s first game in the post-Chris Armas and they got it going with a fast start. Since then though, the Revolution are unbeaten and continue their run as the Shield leaders.

Toronto remain at the foot of the Eastern Conference but a return to BMO Field for the Canadian outfit can only help. The Revolution will be looking to strike back for revenge.

As previously mentioned, the pair met at the start of last month in a five-goal thriller. Yeferson Soteldo, Kemar Lawrence and Tsubasa Endoh fired Toronto ahead. Meanwhile, goals from Carles Gil and Adam Buksa were not enough to rescue anything from the game for New England. Following that match, Bruce Arena’s men won five against the likes of CF Montreal and Atlanta, with the biggest result being a 5-0 obliteration of Inter Miami. The only other game in that run was a goalless draw with Nashville SC. New England comes into this clash with a six-game unbeaten run.

On the other hand, Toronto have only lost once since Armas was dismissed, with the 7-1 annihilation from DC United proving to be the final straw. Toronto may have lost 3-0 to the Union, but with two wins as well as draws against Orlando and NYCFC among others, things are looking up under Spaniard Javier Perez. The interim coaches’ fellow countryman Alejandro Pozuelo has returned to fitness following a layoff with injury. Pozuelo, of course, won MVP last season as they ran it close for top spot in the East.

Gil is at the heart of everything for New England and is leading the way to take Pozuelo’s MVP crown. However, the former Aston Villa man has now joined the injury list which is a big loss for Arena. Last time out against the Union, Matt Polster and Gustavo Bou scored goals in their 2-1 win in Gil’s absence, so they can survive without him. Gil — along with Luis Caicedo — are out but Jon Bell is reportedly back among it, the young defender having impressed so far this term.

Revenge is on the menu for New England and they are certainly the team to beat at the moment. Orlando are 10 points behind in second of the conference whilst Sporting Kansas City and Seattle Sounders trail by six and seven points, respectively, overall. It is quite literally top versus bottom with Toronto bringing up the rear on 15 points after 18 games. FC Cincinnati, the Whitecaps, Inter Miami and Austin FC are all just one point better off.

The season is far from over for Toronto FC.

Earlier this week, the Canadian outfit announced that Javi Perez would remain in his position for the remainder of the season which is a good show of faith. A level of continuity can only help and Jozy Altidore, who fell out with Armas — a battle that the former won clearly — has been brought back into the fold.

The big absentee for Toronto is striker Aye Akinola. He was with John Herdman’s Canada squad at the Gold Cup but picked up an injury in training, thus is denied the chance of revenge against USMNT goalkeeper Matt Turner.

Pozuelo contributed a goal and an assist last time out in a 2-2 draw with NYCFC. He will be the only Spanish playmaker on the field given Gil’s injury and has time-and-time again proven to be a difference maker, when fit. The game will take place tomorrow night at BMO Field, Toronto’s fifth game back at home having been operating out of Exploria Stadium in Orlando amidst the pandemic.

Bruce Arena’s side can grab hold of revenge even without Gil as Tommy McNamara has been one to step up, not to mention that Buksa and Bou can combine and create chances for each other. Will they get revenge and further their advantage in the race for the Shield?