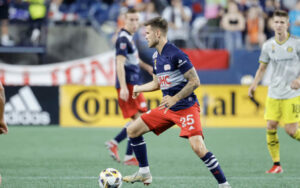 Foxborough, Mass. — New England are pulling further and further away from everyone in the Eastern Conference but the visit of Orlando City is a potential stumbling block. Oscar Pareja’s men have been up-and-down this season and whilst they have those ahead of them in their sights, there are a number of teams close on their own heels.

Despite the pair both competing in the Eastern Conference, they are yet to clash so far this season and so it’ll be fascinating to see how they both approach this fixture.

Last time out the Revolution traveled to Soldier Field where the Fire posed more of a threat than some would maybe expect. With 26 shots to New England’s 18 and 60% possession, the stats even favour Rapha Wicky’s side. Gaston Gimenez scored and assisted for the team from Illinois but MVP candidate Carles Gil stepped up and won the game for the Revs at the death. With just two losses in their last fourteen games, the Shield credentials of the New England Revolution and even that of their MLS Cup hopes can hardly be questioned. Prior to the win over the Fire, they met reining MLS Cup champions Columbus and thanks to Eloy Room’s heroics, that one ended honors even.

Orlando, on the other hand, have endured less promising form. They have been defeated in their last three games, all by Eastern Conference rivals. It was first a 3-0 defeat to this new-look Atlanta United side at the Benz, then Nani was sent off in a loss to CF Montreal before Shield holders Philly beat them 3-1. They are on a seven-game losing run on the road in fact which, when compared to the Revs’ seven-game winning streak at Gillette Stadium, points towards only one result in truth.

Say it with me: Most. Valuable. Player. pic.twitter.com/HzssNinPfd

In regards to team news and it is a much more rosy picture for New England than their Eastern Conference rivals. Luis Caicedo has returned to action after a lengthy spell side-lined whilst Maciel and Emmanuel Boateng are said to be questionable. The club continue to keep their cards close to their chest which seems to be working in all fairness.

On the other hand, Orlando are plagued with absentees. Alexandre Pato remains out and his return to action is seemingly always being delayed, plus Seba Mendez and Chris Mueller are injured too. Nani and Andreas Perea were missing from the loss against the Union and they will be joined on the suspension list by Antonio Carlos, who received his marching orders late on in that game. The final third will be fairly sparse for Pareja with the responsibility falling on the shoulders of Daryl Dike and Tesho Akindele, a pair at opposite ends of their careers.

Taking on the Revs on the road

Last Words on Revolution vs. OCSC

This is probably the pick of the bunch when it comes to Eastern Conference fixtures along with the New York derby and Columbus against CF Montreal. Everything points to three more points for the Revs and they have two wins and a draw to their name in the past three renditions of this fixture. A battle of two of the best coaches in MLS and what should be a battle between two of the best players in the league too, but Nani is of course absent. This promises to be worth the watch.