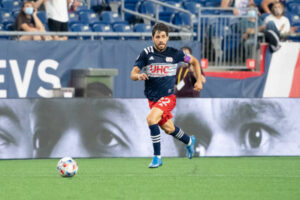 EDITORIAL – The 2021 MLS season is experiencing its first interval after six or seven weeks of full-blooded action. The league’s predictability has come to the fore once again whether it be Columbus’ poor defense of their crown or the Galaxy’s challenge for top-spot in the West, not to mention all the drama surrounding Inter Miami on and off of the field. Focusing on the Eastern Conference though and with Toronto tin twelfth, Atlanta United in eighth, the Crew in sixth and last year’s shield winning Union side sitting second. New England Revolution, behind Carles Gil, are the current team to beat. It is no surprise that a side managed by Bruce Arena is in the mix and here is a look into the Revs’ season so far.

So far this season New England have only endured one defeat and that was to Nashville SC. Gary Smith’s side have had an indifferent start to the campaign but goals from C.J. Sapong and Alex Muyl saw the team from Tennessee overcome the Revs.

They dropped points in two other games, the pair of draws being quite contrasting propositions. The first was on the opening day in a visit to Soldier Field, the Fire’s only prolific goal-threat Robert Beric being joined on the scoresheet by Luka Stojanovic within the first ten minutes. Adam Buksa and Gustavo Bou swiftly replied in Chicago but the Revs were unable to find a winner. The other was very different in the fact that they faced reining Shield champions Philadelphia Union and the action came late. Teal Bunbury off of the bench put New England ahead with five minutes left before Kacper Przybylko rescued a point for Jim Curtin’s men.

On to a more positive note though and that is of course the victories, five of them in fact, that has New England top of their conference and behind only the Sounders in the current overall standings. Interestingly, three of the teams they overcame all have new managers this season, these being Hernan Losada at DC United, Gabriel Heinze with Atlanta United and then most recently, Gerhard Struber and the New York Red Bulls.

Atlanta are obviously an MLS Cup winner from years gone by so beating them is still no formality, the likes of Josef Martinez when fully fit and Barco able to put any side to the sword. The other two are also in transition and both have had topsy-turvy starts, DC not being all that prolific but making up for it with defensive stability on the most part.

FC Cincinnati, like the aforementioned sides, are still yet to step into their full identity going forward but nothing can be taken away from these wins all the same, a 1-0 win over last year’s MLS Cup champions being the standout really. From a CCL exit to a lack of goals besides Lucas Zelarayan free-kicks and own-goals, Caleb Porter’s Columbus could certainly be doing better, a late Buksa strike separating the two at Gillette Stadium.

From a statistics point of view, all eleven of New England’s goals have come from within the eighteen which is interesting really, especially given the potency of Carles Gil from range. The Spaniard is of course so much more than a goal scorer and always has been but that can’t take away from his ability from distance. Sporting Kansas City lead the way in that stat as well as expected goals with the Revs closely following in both, 15.87 XG to 14.5 XG respectively. Another stat to take note of is key passes and Arena’s side are top in that with 94 from their eight MLS games thus far, San Jose Earthquakes standing in second with six less.

Chicharito’s electric start this season sees the Galaxy forward sit atop of the top scoring table with seven and Buksa is at the fore from a New England point of view. The Pole has four to his name whilst Bou has scored twice, the rest have all come from individual sources including a Gil penalty and an own-goal. Whilst Gil may not have yet caught fire in front of goal, he has five assists to his name already showing just how crucial he is to the team. The former Aston Villa man is the lynchpin, he is the metronomic cog that, if taken away, would probably see the system deteriorate.

It is quite easy to focus in on the numbers and use that to illustrate the key players to date but not everyone highlights their capabilities that way. Andrew Farrell is the warrior at the heart of defense and the captain too, his partnership with Henry Kessler who is at the other end of his career is certainly noteworthy. The man behind them is along with Andre Blake probably the best goalkeeper that MLS has to offer and he’s continued on imperious form into this season.

Next, to Canadian international and Generation Adidas athlete Tejon Buchanan who burst on the scene properly last year with New England. He’s been moved around a bit positionally but despite his age, he’s taken to it very well, flying fullback Brandon Bye also being deserving of a mention!

New England only have eight games under their belt in this MLS season under the stewardship of Bruce Arena but that can’t take away from their strong start. They haven’t been hammering in the goals even against the lesser sides but they have a harmonious mix of experience and youth. If either of the DP forwards Bou or Buksa could some way to matching the output of Carles Gil then they are without a doubt one of the favorites to either top the regular season standings or go all the way in the playoffs.

The post New England Revolution, Carles Gil, and Their MLS Season so far! appeared first on Last Word On Soccer.