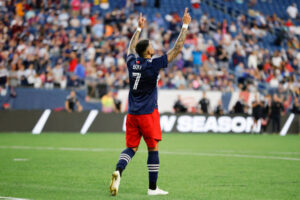 PREVIEW – Carles Gil was absolutely superb yet again in the Revs’ last outing, assisting all three goals in their win over the Red Bulls. This combined with the lack of form and/or fitness for the likes of Pozuelo, Josef Martinez and Carlos Vela stands the Spaniard in good stead regarding the battle to be named MLS’ MVP. Gil and co will visit Toyota Stadium to clash with an indifferent FC Dallas side who are yet to properly get going under Luchi Gonzalez.

New England are currently leading the Eastern Conference and only the Sounders sit above them in the Supporters’ Shield standings, meanwhile Dallas are rock bottom in the West. It seems hard to envision anything other than a win for the Revs but the Red Bulls exposed frailties in a backline that has been renowned for being resolute more often than not.

Also, the Texans have a strong record against their upcoming opponents having avoided defeat in eight consecutive meetings dating back to 2012. Dallas are a side that show up on home soil with their last eight goals coming on the field at Toyota Stadium so it would be remiss to assume that Bruce Arena’s men will march on.

Talking of the Revs’ head-coach though and his experience is always such a bonus, the defensive know-how shines down from him to his players so to see them concede twice last time out was somewhat of a surprise. When they do fail at the back they seem to compensate at the other end, Argentinian Gustavo Bou has netted in three consecutive games for the first time in his career after all.

Prior to the aforementioned win over the Red Bulls, they also beat another side from the Big Apple in the form of Ronny Deila’s NYCFC. Bou and then Tajon Buchanan off of the bench caught the eye in the outfield but USMNT goalkeeper Matt Turner was far and away the standout player, despite being beaten twice. He saved a penalty from Taty Castellanos early on before denying the forward from close range shortly after, but it was his magnificent save in the dying embers, thwarting Moralez that really stood out.

On the other hand, FC Dallas drew with Minnesota United before losing 2-0 to Bob Bradley’s LAFC at Banc of California Stadium. Focusing on the former firstly and it was good to see Paxton Pomykal back in action, the academy graduate has looked superb for his beloved club but injuries have plagued his development. Talking of the conveyor belt of young stars and following in the footsteps of Chris Richards, Justin Che was recently scooped up by none other than Bayern Munich. Not to mention that the likes of Pomykal, Ricardo Pepi and Tanner Tessmann are all still currently with the club too, Pepi scoring the goal in that 1-1 tie with the Loons at the age of eighteen.

MLS Cup has been mightily elusive for the Revs but they are certainly up there as favorites along with Seattle and maybe Columbus too to lift the coveted trophy. The form books would suggest that Arena’s men will continue their march onwards; gaining sixteen points from the last 18 available whilst Dallas have failed to win in the same stretch.

In terms of team news and the Bayern-bound Che made his first start for FC Dallas in midweek against LAFC, this coming in conjunction with the return of Pomykal as well as Jesus Ferreira. The trio could all start this big fixture whilst New England themselves are pretty injury free at the moment, the form of Buchanan who has impressed for the Canadian national team too surely earning himself a spot in the XI.

Elsewhere, Maryland-born defender Jonathan Bell will surely continue playing alongside the experienced Andrew Farrell after scoring his first goal for the club against the Red Bulls, Buksa vs Bou being a big question for Bruce Arena although the form of the latter should make up the mind of the five-time MLS Cup winning coach. Will the imperious play of Turner and Gil see the Revs roll on to yet another victory in this untouchable streak?