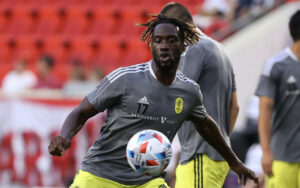 Nashville, Tenn. — C.J. Sapong has featured for many clubs throughout his MLS career. Now, it seems that the longtime veteran striker has found a home in music city. The Nashville SC man scored early against his former team, the Philadelphia Union, to claim a 1-0 victory on Saturday night.

Sapong featured for the Union from 2015-2018, making over 120 appearances. His time in Philadelphia ended and he moved on to the Chicago Fire, where he remained for two years. This year, Sapong is calling Nashville home. Sapong scored his second goal of the season with only 1 minute and 8 seconds on the board.

Sapong slipped in between three Union defenders and slotted home his shot past Andre Blake. The goal was assisted by Costa Rican international Randall Leal.

The goal was the lone tally of the match. With the victory, Nashville continued its impressive run at home. The men in yellow are currently unbeaten at home, and the three points helped propel Nashville SC up to fourth place in the Eastern Conference standings.

On the other end of the pitch, goalkeeper Joe Willis kept busy in net. Willis made four saves, compared to Blake’s two saves for the Union. The two sides were relatively even on the statistics sheet, with Nashville attempting 11 shots, with three on goal, while the Union produced four shots on goal out of eight total shots.

Referee Robert Sibiga elected to hand out one yellow card to Philadelphia midfielder José Martínez in the 79th minute.

What’s next for Nashville SC and Philadelphia?

Nashville SC have a quick turnaround at home, looking to keep their unbeaten streak at Nissan Stadium alive. On Thursday night, Nashville will host Atlanta United — who lost 3-0 to the Chicago Fire this weekend — at 8:30 p.m. EST. Nashville continues its home stand on July 17, hosting the Chicago Fire at the same time.

Meanwhile, the Union will go back to the drawing board and prepare for a Thursday night showdown with the New York Red Bulls, who earned their first road win of 2021 against Orlando City tonight. The match will begin at 8 p.m. EST and will be at Red Bull Arena in New Jersey. Philadelphia returns home against D.C. United — who smacked Toronto FC with a 7-1 win tonight — on July 17 at 7:30 p.m. EST.

The post Nashville SC leaps into fourth place after 1-0 win over Philadelphia Union appeared first on Last Word On Soccer.