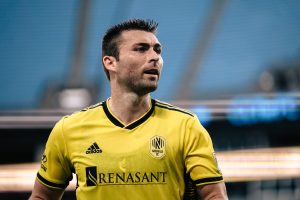 Bruce Arena continues to look for familiar faces when it comes to recruitment. The latest arrival in New England is yet another name that crossed paths with Bruce earlier on in their career. Dave Romney has had a few successful seasons in Nashville and has now been announced as a Revolution player.

Dave Romney is the Latest Arrival in New England

All About the New Signing

Latif Blessing arrived at the club just days ago, and now there is someone else following in his footsteps. Dave Romney, as previously mentioned, is a former colleague of Bruce Arena. During the latter’s time in charge of LA Galaxy came through the ranks and went on to make 84 league appearances for the MLS giants.

A key member of Arena’s coaching staff, Curt Onalfo, spoke highly of Romney on social media. “He is one of the top defenders in MLS. He will help us in 2023 and beyond!” Onalfo also mentioned about having previously worked with the defender, labelling it “a full-circle moment”.

Nashville was the location where Dave Romney continued his impressive form at centre-half. They joined the league as an expansion team and debuted in 2020 with Romney amidst their ranks. He was a key part of their rock-solid spine that also contained the likes of Walker Zimmerman, Dax McCarty and Joe Willis.

In a covid-ridden season, Nashville made it into the post-season via the play-in games. They followed this up with 3rd and 5th place finishes in the Western Conference. The man from Irvine, California was at the heart of this thriving backline under the stewardship of Gary Smith, making 87 total MLS appearances in Tennessee.

Will Dave Romney be an Instant Starter?

Whenever a new signing is announced, the clammer begins over where about they fit it into the manager’s plans. Given some of the defensive performances from last season, Dave Romney has a good shot of going straight into the Revolution XI.

Andrew Farrell and Henry Kessler, when both fit, have a very strong rapport and their partnership may not be worth breaking up. That being said, there has been a lot of speculation regarding the possibility of a back five for the Revs, in which Romney would accompany them and DeJuan Jones and Brandon Bye would continue to be the fullbacks.

Shipping up to Boston #NERevs pic.twitter.com/BYCPYgf21a

The finances involved in the Romney deal, as confirmed by both of the clubs, are as follows. “Nashville will receive $250,000 in GAM in 2023 and $275,000 in 2024.” In the wake of this move, Nashville haven’t hung about in replacing the outgoing defender. Nick DePuy has been acquired from the Galaxy.

MLS experience is hugely valued in the US and Bruce Arena is at the fore of this. A lot of his business as the Revolution head-coach points towards to this, although he does also look for younger talent, Dylan Borrero being a prime example. Romney seems like a very safe pickup from Arena and co.