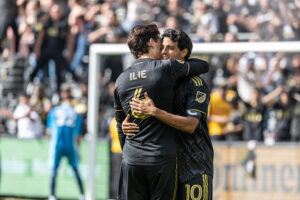 Toronto FC will look to improve on their 1-1 draw away to FC Dallas after mounting a comeback with Jonathan Osorio scoring an easy volley tap-in. They go into this match still without Ayo Akinola but otherwise with a full squad and will likely again go with the home-grown player, Jahkeele Marshall-Rutty. The 17-year-old was named in the MLS Team of the Week and will look to cement the right-back position for himself ahead of Kadin Chung.

Contrast that with New York Red Bulls’ start to the season after an impressive 3-1 win away to the San Jose Earthquakes with goals from Patryk Klimala, OGF Mosso and Tom Barlow. They will be however without Cristian Cásseres Jr who injured his hip flexor during that game and will probably be replaced by Caden Clark. Gerhard Struber will be looking to maintain their passing style of play that earned them the win as they again will look to Klimala to provide more goals upfront.

I am confident this match will not be boring with both teams never disappointed when they play each other. This is a tough one to call, but I am going with a 1-1 draw.

Austin FC will go into this match after thrashing FC Cincinnati, 5-0 at home with goals from Cecilio Domínguez(2), Alex Ring, Sebastián Driussi and an own goal. The Austin team gave debuts to six players in that game and no doubt they will be keen to establish their places in the starting eleven for this Sunday. Josh Wolff will be buoyed by his team’s confident performance but will be wary of the threat posed by the opposition. There are no injuries to report so far for the Verde and Blacks as they will look to repeat that performance again at home.

Inter Miami Coach, Phil Neville will take heart from keeping a clean-sheet against Chicago Fire after giving debuts to eleven players including 17-year-old Noah Allen who has come up through the academy set-up at the Herons. Gonzalo Higuaín will be hungry to open his goalscoring account in this match having been denied in the 0-0 draw last week at the DRV PNK Stadium. DeAndre Yedlin has already proven himself in the European leagues. Will he recreate his class and ability against a rampant Austin FC team?

If Austin FC repeats their performance from Week Two, I believe they will win 3-0. But I am not willing to underestimate this Inter Miami team if they raise their performance levels from their draw last week. I will watch with keen interest.

Player of the Week

LAFC have got their bit between the teeth after a stunning 3-0 win over the Colorado Rapids all thanks to that hat-trick from Carlos Vela. Vela has shown to be a shining example not just as a player but as a captain in that win. Steve Cherundolo’s lack of head coach experience did not show last week with six players making their debuts including the experienced goalkeeper, Maxime Crépeau. Now with Portland Timbers about to receive a nervous red-carpet welcome to the Banc of California Stadium, LAFC is in high spirits and has no injuries to report so far.

Portland Timbers on the other hand failed to take home game advantage drawing 2-2 against the New England Revolution. Despite the bicycle-kick spectacular from Yimmi Chará, the Timbers go away to LAFC looking for a winning spark to kickstart their campaign. Giovanni Savarese has not reported any player concerns in his weekly online press conference. With that in mind, Los Angeles native, Zac McGraw will be playing in front of his friends and family at the Banc of California Stadium.

I think this will be a 2-1 victory for LAFC with Carlos Vela either scoring or contributing to one of the goals. Portland will definitely make it difficult for LAFC but unless they become stronger in defence, they will struggle in this match.

Summary of the MLS Match Picks

It will be interesting to see if the MLS Match Picks predictions come true or not. There is always trial and error in making these predictions. The TFC vs. Red Bulls game will take place at BMO Field on Saturday, March. 5. The game will start at 2:00 p.m. ET and it will be shown on TSN and MSG.