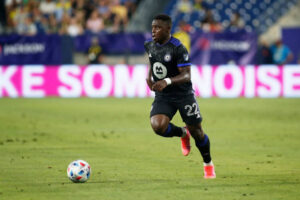 MONTREAL – Goals from Sunusi Ibrahim and Victor Wanyama in the second half gave Montreal a 2-1 comeback win over the New York Red Bulls. Patryk Klimala opened the scored deep in first half stoppage time to give the Red Bulls the lead. Montreal showed their fortitude and pressing for an equalizer and did one better to snap their five-game winless streak. The second half saw two goals, a penalty that was retaken three times controversially in a bemusing sequence.

Both managers ring in the changes for their respective starting lineups. Montreal makes five changes to the team that lost at DC United. Defenders Aljaz Struna and Rudy Camacho enter for Joel Waterman and Zorhan Bassong who are on the bench. Captain Victor Wanyama is restored to the side in midfield over Samuel Piette. The dangerous duo of Djordje Mihailovic and Mason Toye partner Joaquin Torres in attack. Ibrahim Sunusi and Bjorn Johnsen are options off the bench.

New York makes just two changes to the eleven that lost at Chicago last week. Sean Nealis is back from injury and is at the heart of the defense alongside Amro Tarek. Andrew Gutman is also back in the lineup at wing-back, meaning that John Tolkin makes the move to midfield, Cristian Casseres Jr and Wikelman Carmona are dropped. The rest of the team is unchanged, the attack is led by Caden Clark, Fabio and Patryk Klimala.

First Half: Red Bulls take the lead through Klimala penalty

The feeling out process started out as both teams looked to see where they can find openings.

Montreal nearly found themselves in the lead. Mason Toye raced the down the flank and squared his cross along the face of goal only for Guillard to be denied brilliantly by Coronel at point blank range. One of the saves of the weekend.

The flow of the game was choppy throughout as there were stoppages and fouls breaking up play. But near the end of the half, Andrew Gutman was brought down inside the box by Struna, winning a penalty. Up stepped Klimala and scored, sending the keeper diving the wrong way. That gave the Polish international his fourth goal of the season, tied for the team lead, and it’s also his second goal from the spot. Furthermore, it’s also the Red Bulls first goal in Montreal since Lloyd Sam netted back in 2015. What a time to get it.

Meanwhile, Montreal will need to bounce back in order to get back in this game. They created some nice opportunities in the game, with three shots on target and controlling the majority of possession.

Second Half: Montreal score twice to win in a truly baffling second half

New York made a double substitution to start the second half with Dru Yearwood and Cristian Casseres on for John Tolkin and Sean Nealis.

Montreal looked to make headway and stretch the Red Bulls were being denied by Coronel. Omir Fernandez entered the match for Caden Clark as New York made its third sub.

Montreal looked to have equalized but Mason Toye lashed his clear effort wide of goal. A sitter, and a golden opportunity off a wonderful pass by Torres. But the goal did come for Montreal as Ibrahim Sunusi, 18 years of age heads in the equalizer through traffic. Credit to Mihailovic for creating the assist out of nothing as he was by the end line.

Tom Barlow replaced goalscorer Patryk Klimala. Danny Royer also makes his return, he replaced Fabio. Montreal then made their own double substitution with Choiniere Struna coming off for Mustafa Kizza and Bjorn Johnsen.

Montreal would be awarded a penalty in the 92nd minute. Amro Tarek slid across the box with his arm extended and the cross hit his arm. But Coronel saved the penalty, only for him to try again as he was off his line. Coronel saved a second time but was off his line again after the Toye stutter stepped. Wanyama stepped up and scored despite Coronel getting a hand to it.

After 103 minutes of play, Montreal wins 2-1 in a really baffling game.

Well where do we begin, how about the obvious. There should be no way, that a penalty taker can stutter step, causing the goalkeeper to move off his line and then retake the penalty because of it. Lots of things are head-scratching in MLS and soccer as a whole, but that takes the cake, because it messes with the outcome of a game such as this one. Red Bulls were fuming and rightly so, as they felt rooked out of this game.

Credit to Montreal for pushing through, they outshot New York 10-7 in the second half and it was great to see the young Nigerian Sunusi grab his first goal of the season. Games like this make the Canadian outfit one to watch as they make a playoff push throughout the season. They travel to Cincinnati next, the last encounter was a 5-4 spectacle victory.

As for the Red Bulls, there were positives to take from this game. The attacking three of Clark-Fabio-Klimala had some moments, the formation allowed them to be closer together and play off each other at times. This may be the way going forward, but defensively they will give up quality chances, it’s just been the story of their play at the back the whole season. Carlos Coronel should hold his head high, he was magnificent in stopping point blank would-be goals and saving two penalties before the third time got him. It’s now seven games without victory, and one win in ten matches. Back to the drawing board now, as reigning champs Columbus Crew visit Red Bull Arena on Wednesday night.

The post Montreal score twice in second half to overcome Red Bulls 2-1 in heartbreaking fashion appeared first on Last Word On Soccer.